Heads Up: Traffic within BGC will flow in one direction real soon

As we usher in the “Ber” months today, we likewise expect heavier traffic as the Christmas season in the country begins.  Places like posh Bonifacio Global City in Taguig are just one of the many locations that foresee a large number of vehicles and pedestrians traversing its streets within the coming months.

And since traffic is already quite heavy in this highly urbanized area, the folks who manage traffic within  the city are gearing up to implement a one-way traffic scheme beginning September 17, 2018. This is aimed at addressing traffic congestion by maximizing the width of the road and minizing conflicts between vehicles and pedestrains.

To help maximize the effects of the new traffic scheme, BGC will continue to enforce clamping and towing of illegally parked vehicles. This will help reduce the number of obstructions and make use of the entire width of the road.

Bonifacio Global City, as many are aware, is one of the premiere cities within Metro Manila. The numerous offices, residential condominums, and leisure establishments translate to thousands of people coming in and out of the city each day. This does not only include those already residing in the city but folks who likewise come from other places just to experience what this fair urban environment has to offer.

So the next time you’re in Bonifacio Global City, just be mindful of the new traffic scheme that’s set to take effect on September 17, 2018. 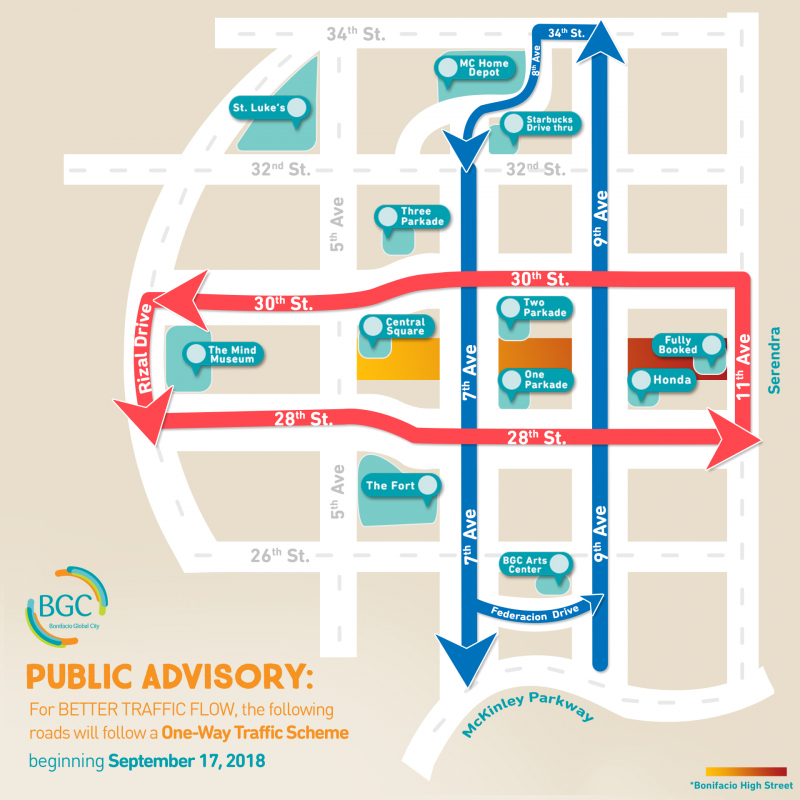