If you haven’t switched to Converge today, why not? Here are 3 Fun Fiber Facts on why you should... NOW

One of the great things that happened in the Philippines in recent years is the push to let in more internet service providers. This was carried out to not only improve the modernization the country, but also to provide consumers with internet service options to better fit their needs, budget, or requirements.

A number of internet service providing companies have emerged since 2016, and one that’s standing out today is Converge ICT Solutions Inc. or simply known as Converge. A relatively young brand, Converge has proven itself worthy of commendation when the onslaught of the COVID19 pandemic set in.

Due to public health and safety regulations, many Filipinos were forced to work at home or remotely indoors. Thus, the average household’s internet consumption has significantly increased with every home having multiple heavy internet users simultaneously. The situation has pushed the action button, bringing the company to the height of being touted as a strong third-player in the industry, stirring up the competition in the process.

In order to fuel the momentum, Converge recently announced that they are giving free speed upgrades for all existing and new subscribers for their base plan or FiberX 1500 — doubling the speed from 50Mbps to 100Mbps! In today’s online-heavy standards of living, learning, and productivity, this is a very welcomed breakthrough.

Okay, so that’s how Converge basically levelled up how Filipinos utilize and enjoy the internet. But just how exactly is Converge able to provide this blistering speed to its consumers? 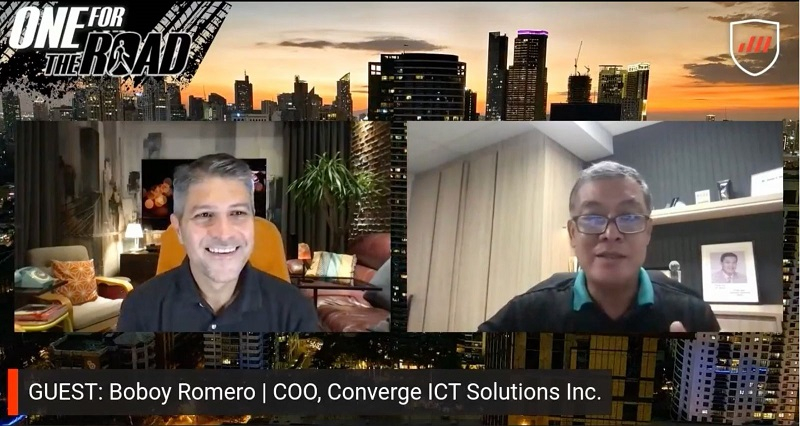 Let Mr. Jesus “Boboy” C. Romero answer this question. As the company’s Chief Operations Officer (COO), he’s got the brilliant mind to explain the whys and the hows behind Converge’s rapid climb to success.

In a recent interview on James Deakin’s “Tito’Clock” weekly show on Facebook and YouTube, Mr. Romero shared three Fun Fiber Facts on why its broadband service is in a class of its own. Here’s what he had to say:

Fiber is equipped with a speed that surpasses copper technology, with Fiber-to-the-home lines’ coming in at 1 Gigabit per second. Moreover, these offered speeds are symmetric, giving the same speeds for upload and download.

“With copper technology – whether DSL or coaxial - the upload is a whole lot slower than the download, and not suited for work-from-home that we’ve been doing a lot these days,” noted Romero.

Mr. Romero added that fiber carries data through light. That being said, it’s a lot more immune to interference, for example; electromagnetic surge. On top of that, fiber is more resilient to damage, like corrosion. For fiber, capacity is king – the fiber optic subsea cables which telcos and ISPs lay down can run up to 24 terabits per second. Talk about a revolution, seeing that just over a decade ago, many Filipino internet users are struggling to connect using kilobytes of data. To put things into perspective, a single terabyte consists of roughly 1-billion kilobytes, that’s 1 plus 9 zeros in figures.

With the pandemic exposing the need for high-capacity and high speed internet that wireless broadband can’t meet, Converge has already launched its aggressive expansion plans and the pandemic further accelerated the demand for fiber internet.

“When we started, fiber didn’t exist on the scale that it does now. We were the first to offer unlimited bandwidth – no data caps through fiber. After this, the industry followed suit,” said Romero.

Along with removing the data caps and offering users symmetric speeds, Converge was in no short supply of innovation. Today, it offers the Time of Day Fiber broadband plans. This allows customers to get doubled speeds at the time of the day they need it most. Best part about this is that the Converge Time of Day Fiber broadband plans remain unrivalled in the industry.

“There is that innovation in Converge that comes with being new,” he noted.

Since it started to build its own network in 2016, Converge’s total fiber assets – which now run to nearly 500,000 kilometers – is the newest among the telco players, and the only one that uses pure fiber from its backbone to its last mile network.

“We built this network at a cost lower than anybody else because we built it by ourselves – not outsourced which is the norm in the industry. We have a company which builds the infrastructure, allowing us to control the quality. As a new player, we have no legacy technology, which means whatever technology we put into the infrastructure is the latest,” the chief operations officer said. 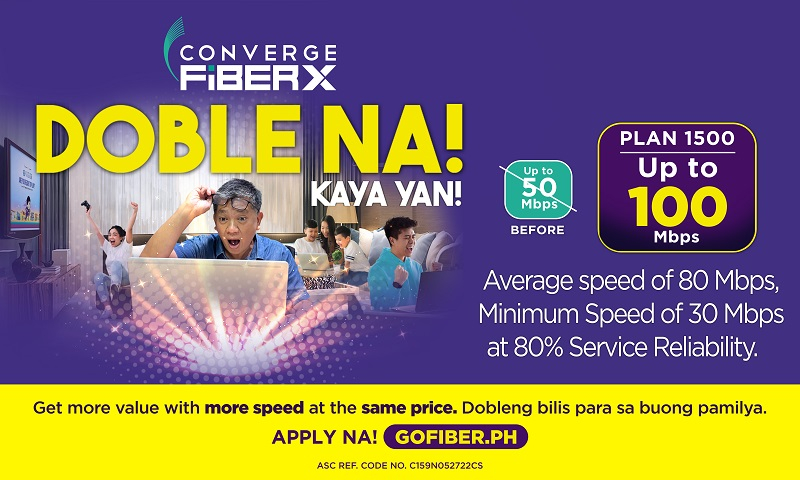 As the pandemic slowly subsides and the country moving back into normalcy, the fact remains that the true “new normal” which Filipinos will take away from the pandemic experience is that working  online from home or remotely elsewhere is possible, is now needed, and is slowly being embraced by many businesses, companies, schools, and more. And from the way things are going, the internet will be an even more vital necessity to move things forward.

Rest assured that Converge will continue to offer better speeds and maintain its superior quality to make sure Filipino internet users can continue to maximize its fiber technology.

And, about that particular Converge improvement stated earlier, that ”FiberX 1500 —doubling the speed from 50Mbps to 100Mbps” part of this article you just glossed over?

Yeah, if you’re a subscriber of their FiberX 1500 base plan, Converge says they’ll automatically trigger the 100Mbps speed boost. To verify the new speed, simply run a speed test via the Ookla website or app to see the double speeds.

For those interested in upgrading their home online experience with pure fiber connection, log- on to https://gofiber.ph. You can also watch the full Tito’Clock video interview with Mr. Romero here: https://cnvrge.co/ConvergeOnTitoClock.

Previous Pause Next
Vespa PH wants you to Live Colorfully, Live Free with its grand display at the SM MoA
/blog/vespa-ph-wants-you-live-colorfully-live-free-its-grand-display-sm-moa
There are now 10,000 Isuzu Traviz units nationwide, and that calls for a commendation
/blog/there-are-now-10000-isuzu-traviz-units-nationwide-and-calls-commendation
2022 Toyota Gazoo Racing Vios Cup PH is back on track this July, also catch the action live online
/blog/2022-toyota-gazoo-racing-vios-cup-back-track-july-also-catch-action-live-online
Maserati PH unleashes a new kind of Levante, one that puts the model into an exciting future
/blog/maserati-ph-unleashes-new-kind-levante-one-puts-model-exciting-future
The versatile K2500 showcased in various configurations at the 2022 Manila Food & Beverage Expo
/blog/versatile-k2500-showcased-configurations-manila-food-beverage-expo
Dad’s Mega Ride showcase by Autohub Group invites everyone to celebrate Father’s Week in style
/blog/dad%E2%80%99s-mega-ride-showcase-autohub-group-invites-everyone-celebrate-father%E2%80%99s-week-style
Mitsubishi PH kicks off Life KYARABAN Roadshow with loads of cool deals, perks, and more
/blog/mitsubishi-ph-kicks-life-kyaraban-roadshow-loads-cool-deals-perks-and-more
Hey people, you might wanna check out these fresh June 2022 deals and promos from Toyota PH
/blog/hey-people-you-might-wanna-check-out-these-fresh-june-2022-deals-and-promos-toyota-ph
Mitsubishi PH opens dealership #64 in Lucena City under MZM Corp.
/blog/mitsubishi-ph-opens-dealership-64-lucena-city-under-mzm-corp