Isuzu Philippines Corporation (IPC), the official distributor of Isuzu vehicles in the country, entered this year’s Philippine Bus and Truck Show. Held last July 13 to 15, 2018 at the SMX Convention Center, SM Mall of Asia complex, Pasay City, the Japanese marquee fielded its latest commercial vehicle models like the N-Series, as well as the QKR and EXZ trucks.

However, the brand’s centrepiece this year was the Isuzu QKR77. The QRK77 is special as it is IPC’s take on the modern jeepney or public utility vehicle (PUV).

As per the set regulations and standards by the Department of Transportations (DOTr) PUV Modernization Program, the Isuzu QKR77 or the Isuzu Modern PUV shown in the event came in 3 versions from such body builders as Centro Manufacturing Corporation, Almazora Motor Corporation, and the Sta. Rosa Motor Works, Inc. As different as they are in terms of aesthetic design, all 3 body builders share 1 thing in common; their complaints to the Bureau of Philippine Standards PNS 2126:2017 (Phil. National Standards No. 2126 Series of 2017).

For example, all 3 versions have ample passenger space so commuters can move around more freely and easily. Each model also has a door that opens on the right-hand side facing the sidewalk. This adds safety and convenience when getting in and out of the passenger cabin. 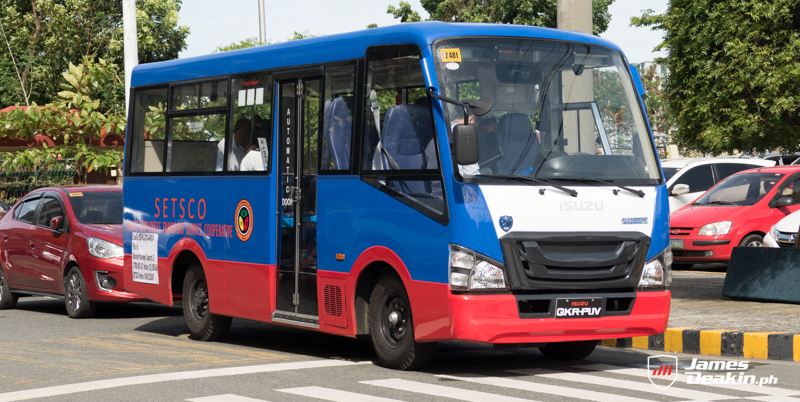 A huge testament of IPC’s success in helping the PUV Modernization Program is its recent stint in the Senate of the Philippines. In short detail, IPC was the manufacturer chosen by the Senate to provide Senate Employees Transport Service Cooperative (SETSCO) with a new fleet of transport vehicles. This, in turn, served as the testing ground for the DOTr to see if its program would work in real-life. More of that news on this article.