British carmaker MG, through its official local business arm, The Covenant Car Company, Inc. or TCCCI, has set its sights to go bigger from the get-go this 2020. This came in the form of its recent partnership agreement with a handful of established automotive dealer groups that would bolster its foothold in the local car industry for years to come.

Of note, MG Philippines has total of 18 dealerships throughout Luzon, Visayas, and Mindanao. And to open a new year and decade, MG Philippines is proud to announce the latest dealer principals to sign on with MG, demonstrating their trust and the confidence in this British heritage brand, its modern, stylish, and attainable products, the growth and foreseeable potential of the MG brand, and the very capable team at TCCCI behind it all.

Ark Diversified Inc., led by its President and CEO Mr. Ray Jarina, brings years of commercial vehicle sales success. This time around, the group continues that same success with the inauguration of MG Commonwealth in Quezon City. The ANC Group, on the other hand, is widely considered as one of the biggest and most influential local automotive groups. Under President and CEO, Anthony N. Cheng, the group is slated to open MG Makati to offer car sales and aftermarket services in a main business center.

The Advan Motor Inc. and its President, Mr. Ramon Sison, will pioneer MG’s expansion in the eastern side of the Metro as it opens MG Marikina. Meanwhile, the Autohub Group, along with President Mr. Willy Tee Ten (who is recognized as one of the 33 most influential personas in the automotive industry in 2019), is geared to add MG Shaw to its growing list of auto dealers.

With this milestone achieved, and the promise of bringing in more models MG Philippines sees 2020 as its banner year. Visit any of these MG dealerships nationwide. 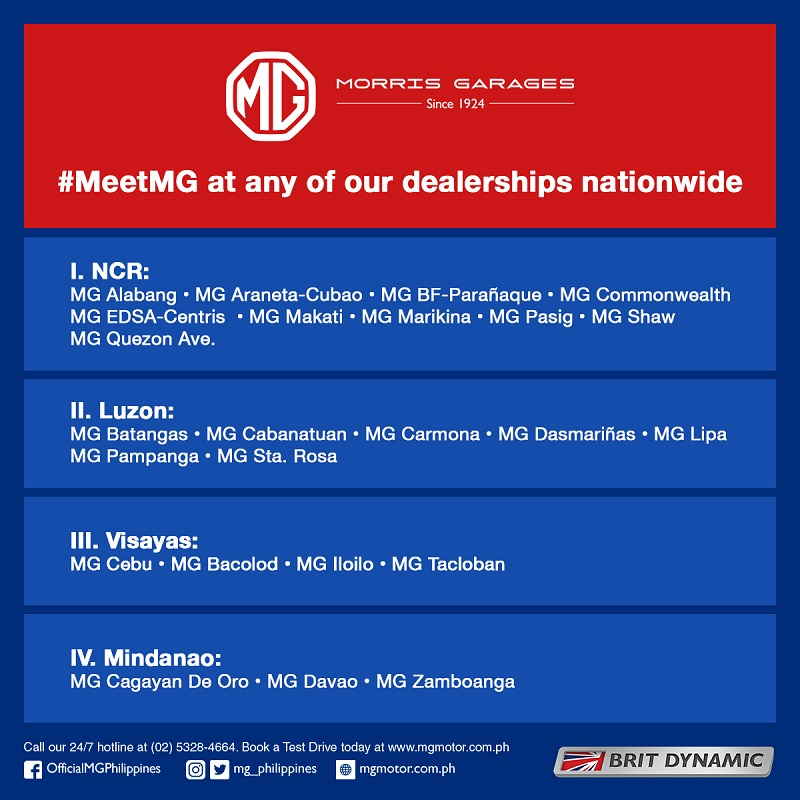