MINI Asia and British United Automobiles Inc. today announced the launch of the MINI John Cooper Works GP Inspired Edition in the Philippines. This special model draws upon the mettle of its forebear, the third-generation MINI John Cooper Works GP, and features exclusive specifications and an exhilarating 231 hp engine in the quintessential 3 Door hatchback.

Mr Kidd Yam, Head of MINI Asia, said, “We received overwhelming response for the MINI John Cooper Works GP when we introduced the car in the Philippines in October last year. As such, we’ve specially developed the MINI John Cooper Works GP Inspired Edition to cater for fans who weren’t able to get their hands on the original, but still want to own a unique piece of motorsports history. This special edition was first conceptualised in Singapore, and only 5 units will be available in the Philippines.”

Mr Willy Tee Ten, President of MINI Philippines and Autohub Group of Companies, also said, “MINI has a longstanding history in motor racing, and the John Cooper Works range draws on this experience to bring authentic racetrack flair to the road. The MINI John Cooper Works GP Inspired Edition packs on the essence of John Cooper Works, and we are very pleased to launch this highly-anticipated model here in the Philippines.” 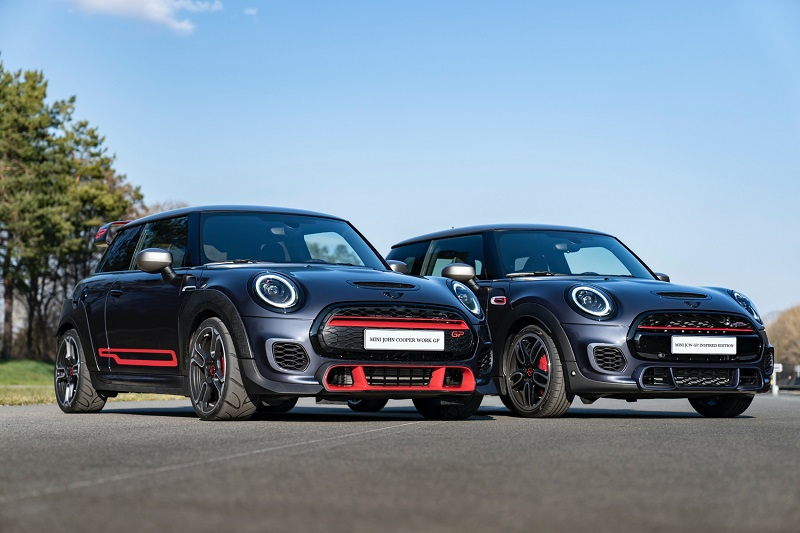 The MINI John Cooper Works GP Inspired Edition is fitted as standard with 18-inch lightweight forged wheels in the John Cooper Works Cup Spoke design with runflat tyres. In a callback to the original model, the hub caps on the light alloy wheels bear the GP logo. The Piano Black headlight surrounds and the blackened inner parts for the adaptive LED headlights and rear lights, the black MINI logo on the bonnet and tailgate serve as additional highlights. A unique “GP Inspired” lettering distinguishes the MINI John Cooper Works GP Inspired Edition from its forebear. This lettering can be found on the two side doors, as well as on the air inlet trim and the C-pillar of the hatchback. 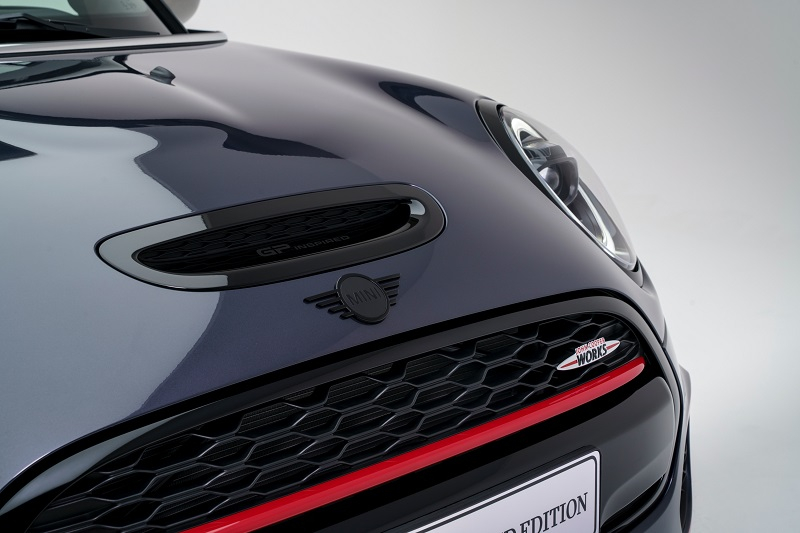 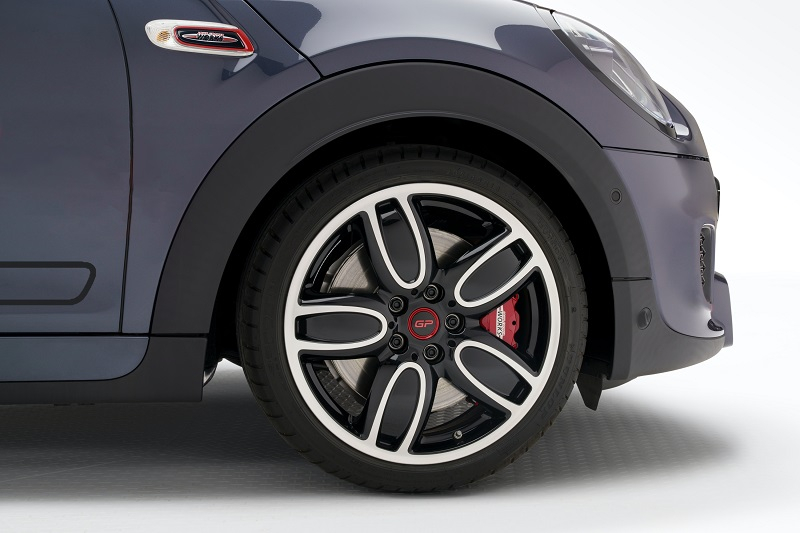 Standard interior equipment includes John Cooper Works sports seats at the front in Dinamica leather combination. The GP badge is integrated underneath the integrated headrests – this badge is also featured in the floor mats for the driver and front passenger. The “GP Inspired” lettering is displayed on the high gloss cockpit fascia, and both front and rear velour floor mats are finished in red stitching.

The John Cooper Works leather steering wheel has been designed in a unique concept. The steering wheel is covered in Walknappa Leather, features red stitching, and a stylish 3D printed metal centre marking for the 12 o’clock position. Associated with the 8-speed Steptronic Sport transmission, the metal shift paddles on the steering wheel with the “GP” logo are likewise 3D-printed in metal. The key cap is also a product of the 3D printed process, and makes a stylish statement with the “GP” lettering in the middle.

The MINI John Cooper Works models possess breathtaking performance qualities including extreme agility, a high degree of steering precision, and immaculate handling. The 2.0-litre, 4-cylinder engine with MINI TwinPower Turbo technology in the MINI John Cooper Works GP Inspired Edition transforms the 3-door MINI into the epitome of pure driving fun in the premium segment of small cars. The 320 Nm of maximum torque ensures plenty of pulling power, while the adaptive suspension keeps the driver feeling in total control especially during dynamic cornering. The sports exhaust system adds an acoustic flourish to the car’s sporty character with its hearty soundtrack. 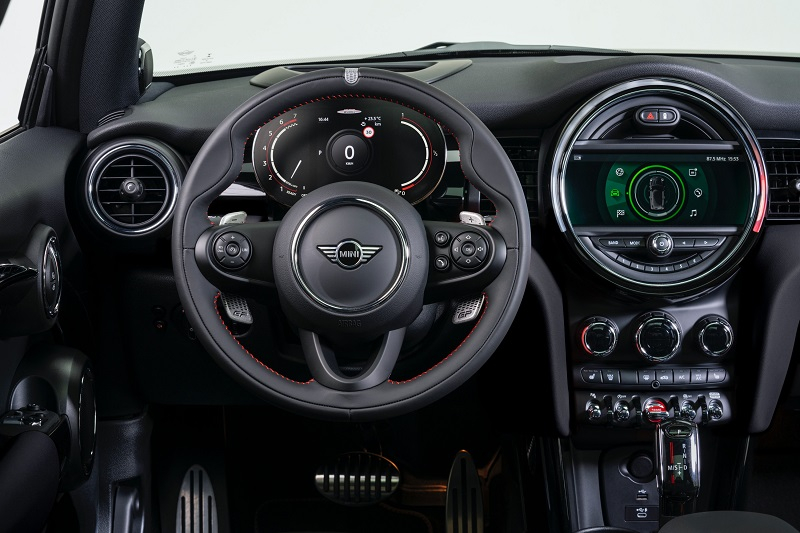 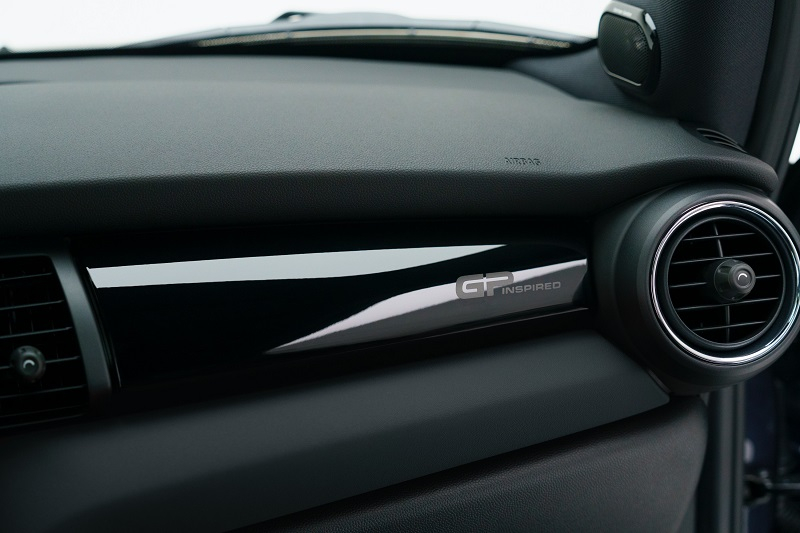 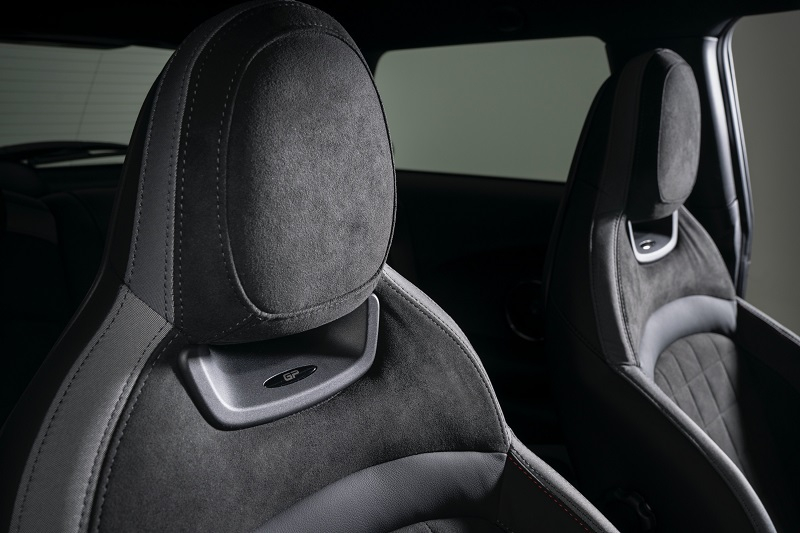 The 8-speed Steptronic transmission is operated via a model-specific electronic gear selector switch. Manual intervention in gear selection is also possible using the standard shift paddles on the steering wheel for particularly spirited driving. For day-to-day use, the Steptronic sports transmission also caters for coasting in MID and GREEN mode. The auto start/stop function incorporates navigation and front camera data in its operation for smarter operation – for example, if the car detects that the vehicle is stopping briefly before making a turn or entering a roundabout, or if the traffic ahead has started moving again, the engine will not be switched off.

The MINI John Cooper Works GP Inspired Edition sees many premium features fitted as standard such as Park Distance Control in the front and rear, and a 12-speaker Harman Kardon sound system. A particularly useful feature is the MINI Head-Up Display – this helps the driver concentrate on what is happening on the road by displaying relevant information right in the driver's line of vision. As such, pertinent driving information can be seen quickly and conveniently without the driver having to take his eyes off the road.

The Driving Assistant package is also fitted as standard. This package incorporates a camera-based system that recognises and reports speed limits, thereby increasing safety on the road. A digital high-beam assistant with Adaptive LED Matrix Headlights is also particularly useful when travelling at night in areas that are not well-lit. The collision warning and pedestrian warning systems with city braking function make it easier to avoid dangerous situations, particularly in city traffic. The Parking Assistant offers maximum comfort in searching for and using parking spaces, while the reversing camera gives drivers a better view when manoeuvring. 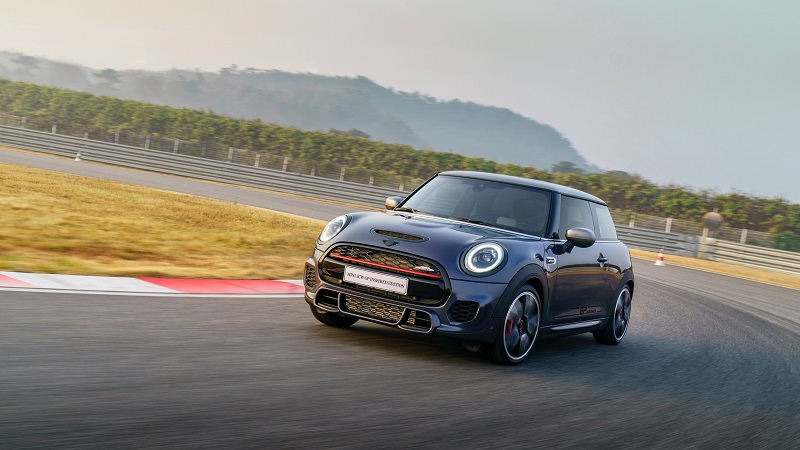 Other innovations in the Driving Assistant package include the camera-based speed and distance control – these help the driver automatically keep a safe distance from the vehicle in front, and the speed limit information system detects and displays speed limits as they apply to the current section of road. This system is supplemented by the no passing display and traffic sign memory functions. The digital headlight assist function contributes to optimum visual conditions when driving at night. Oncoming traffic and preceding vehicles are registered by a camera, while automatic switching to dimmed headlights avoids causing a nuisance for other drivers.

Customers can log on to https://secure.mini.com.ph/gp-inspired-edition/ for more information and make an appointment to view the MINI John Cooper Works GP Inspired Edition in person. 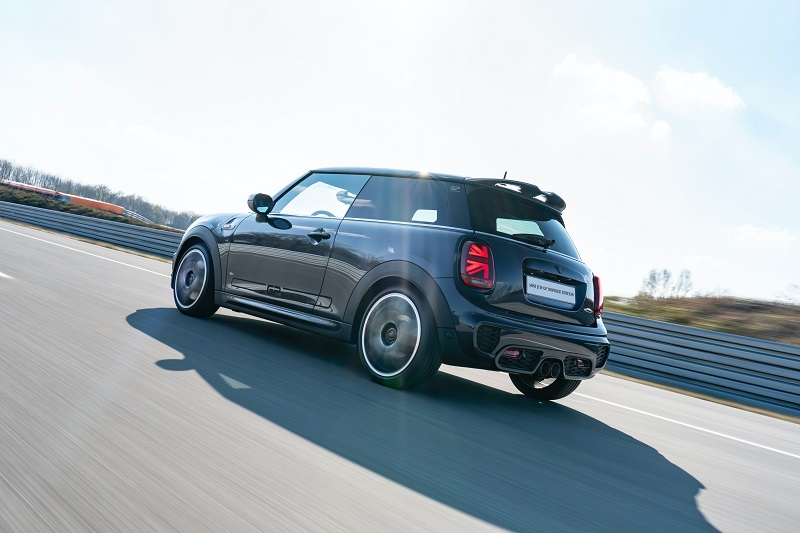