It’s been a couple of months since the last race of Toyota Motor Philippines’ Vios Cup. So we’re quite sure that motorsport fans are pining for some wheel-to-weel action. Well, the wait is over as the final race of the Vios Cup Season 5 happens this Saturday, September 22, 2018 at Clark International Speedway in Pampanga.

As with previous races, this one promises to be an action-filled event with no less than 53 cars jockeying for position just to bag the coveted Championship trophy. The field will see a mix of various personalities who are all vying for that top step of the podium.

Celebrity spotters will likewise get a treat as their favorite stars will show their stuff behind the wheel. Get to see Sam Milby, Diego Loyzaga, Chie Filomeno, and Sofia Andres compete against the likes of Troy Montero, Fabio Ide, and Gretchen Ho, who are returning to the Vios Cup grid.

Motorsport enthusiast James Deakin and racer Gaby Dela Merced will take care of hosting duties, giving everyone a blow-by-blow account of the action as it unfolds.  Catch the action this weekend at the Clark International Speedway. 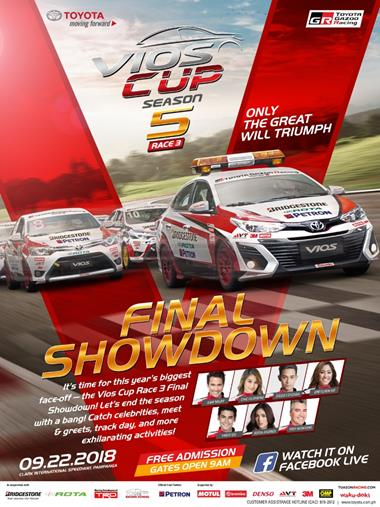