Toyota Motor Philippines (TMP), the official distributor of Toyota vehicles in the country, has concluded its 2017 season of the Vios Cup. The said 1-make race’s final showdown this year, which attracted more than 50 drivers, took place last November 25 at the 4.2 Km long Clark International Speedway (CIS) in Pampanga.

As with its previous rounds, the 2017 Toyota Vios Cup consisted of 4 categories that test each driver’s skills on an even playing field. These are the Rota Promotional Class (which also incorporates the Celebrity Class), Bridgestone Sporting Class, and the top-seeded Total Excellium Super Sporting Class. 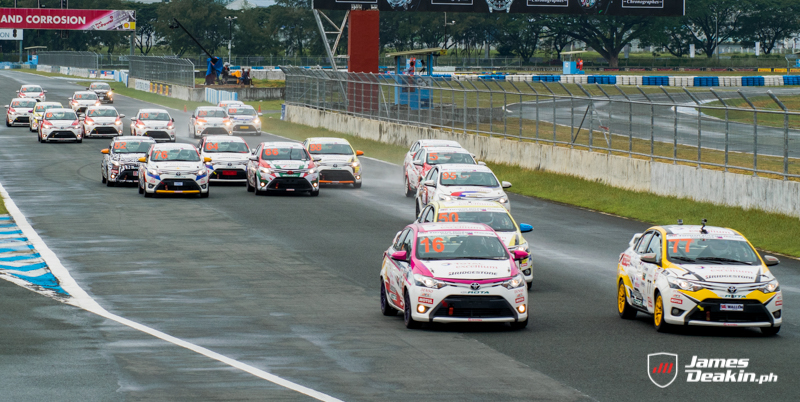 The racing weekend’s action was flagged off with the start of the Rota Promotional Class race. Within a few minutes of Lap 1, chaos ensued as several cars came into contact with each other. But this incident didn’t stop the fighting spirits of Gel Napat (Biskeg), Marc Soong (Obengers), and Don Vic Portugal (Toyota San Pablo), who crossed the line in that order.

Amid the opening lap fiasco, the Celebrity Class had Fabio Ide, Dominique Roque, and Aubrey Miles gunning it for the win. They safely made it through in 1st, 2nd, and 3rd places, respectively.

Up in Bridgestone Sporting Class, celebrity racer turned pro competitor Sam YG (Toyota Quezon Avenue) made a heroic comeback as he dominated the 12-lap race. After a valiant effort to place himself from 17th to 3rd on Lap 3, he then took command of the lead on Lap 5. In the end, he placed 1st, followed by Sean Velasco (Toyota Cebu) in 2nd and Tonton Ramos (Toyota San Fernando) in 3rd.

Meanwhile, the Total Excellium Super Sporting Class, Allan Uy (Allan Uy Racing) established a commanding lead early on in the race. This had the crowd focusing on the battle for 2nd between Daniel Miranda (Obengers), Miko Maristela (Toyota Quezon Avenue), and Gerald Loy (Biskeg). The trio swapped places a number of times until Miranda took the upper hand to take 2nd. Maristela followed suit in 3rd, leaving Loy in 4th. 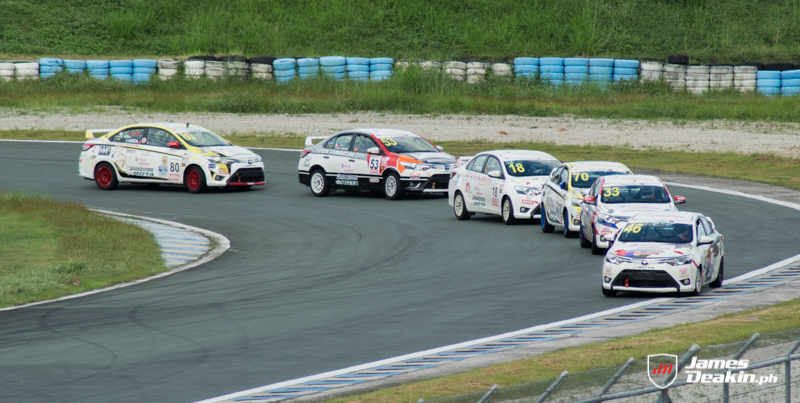 By mid day, the sky was blanketed with dark clouds, a sign of an exciting finale to come. The action continued on with a rather wet Race 2 of the Rota Promotional Class. This class had Red Diwa (Toyota Isabela) claiming 1st, followed by Gel Napat in 2nd, and Vincent Courcol (AP Corse/Toyota Makati).

Being their final chance at winning races for this year, the folks at the Celebrity Class delivered well to please the crowd. On the podium were Fabio Ide, Dominique Roque, and Troy Montero. They claimed 1st, 2nd, and 3rd places, respectively.

The last showdown in Total Excellium Super Sporting Class this year was highlighted with an intense action from Lap 2 onwards. This began with Daniel Miranda who started the race in 6th due to the reverse-grid order rule. This, and the additional weight handicap, didn’t stop Miranda from reeling in opponents until he took control of the pack coming into Lap 3.

Shifting the focus on the midfield, Maristela, who was battling for 4th, careened out of control on Lap 7. This had his car flipping off the gutter and landing on its roof. Thankfully, he was okay, but the incident prompted the stewards to launch the Safety Car.

When the race resumed on Lap 10, Miranda floored it again to establish a wide gap from the rest of the pack. As the chequered flag came out, Miranda crossed the line to take the season victory over Ramon Tanjuatco (AP Corse/Toyota Makati) who claimed 2nd. Another celebrity competitor tuned professional racer Dominic Ochoa (Toyota Quezon Avenue) settled for 3rd. 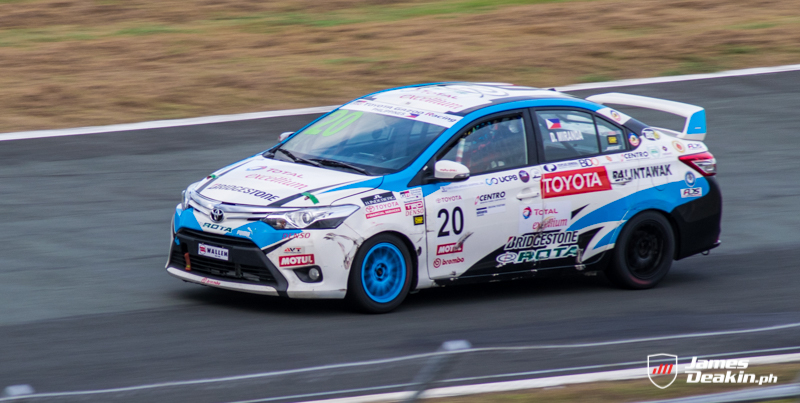 Congratulations to all the winners, a brilliant and action-packed run this season. See you again next year! 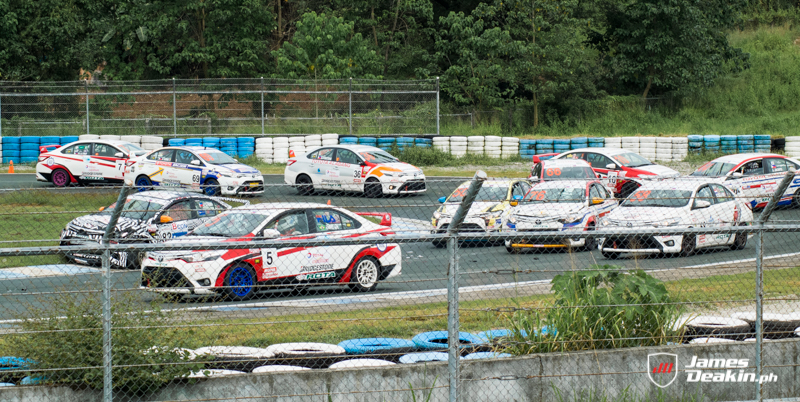 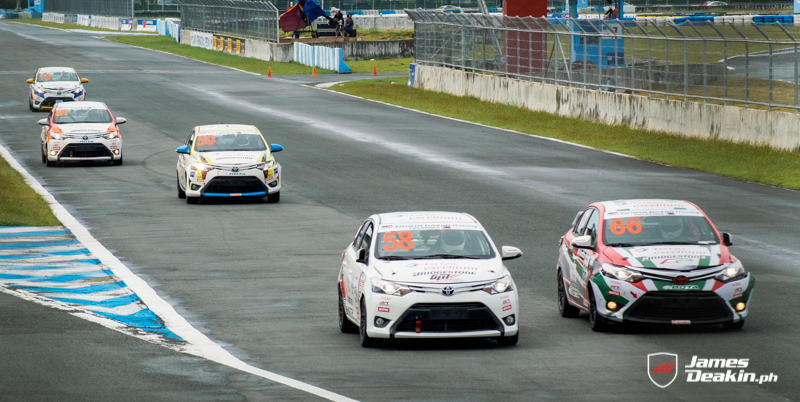 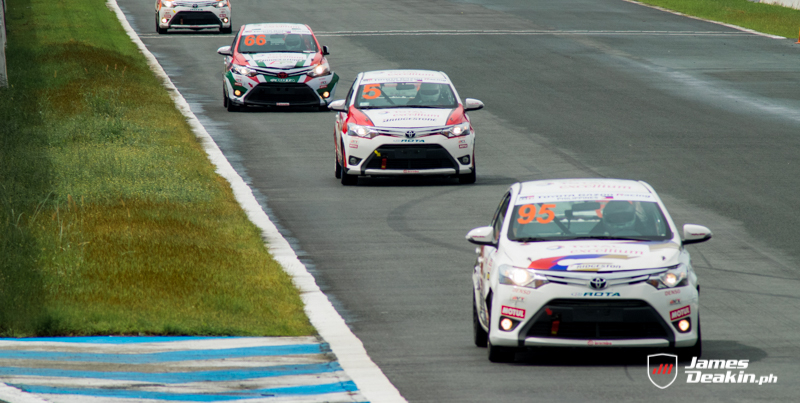 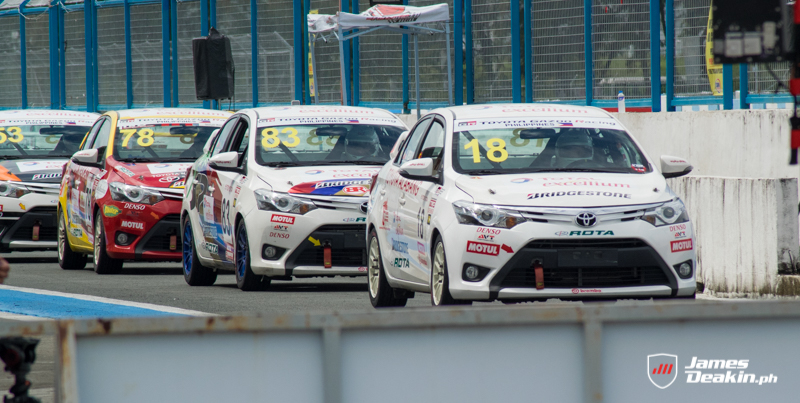 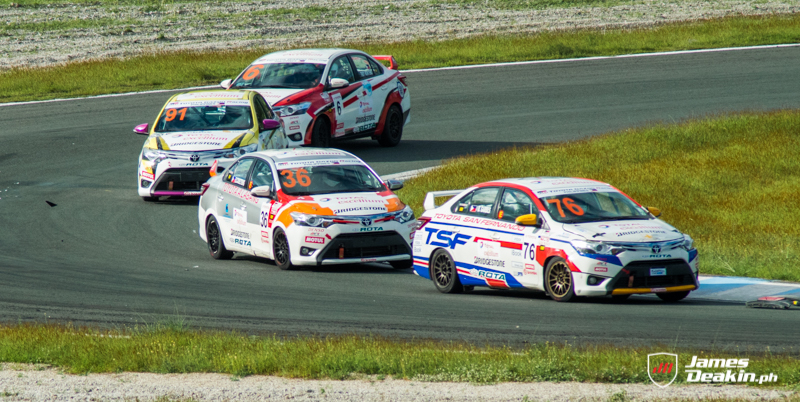 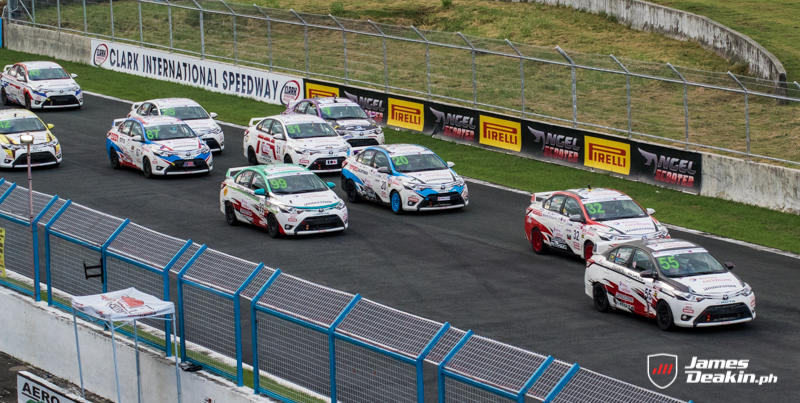 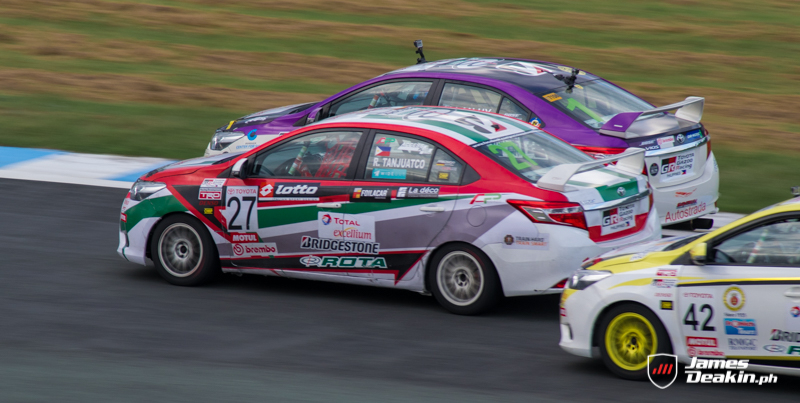 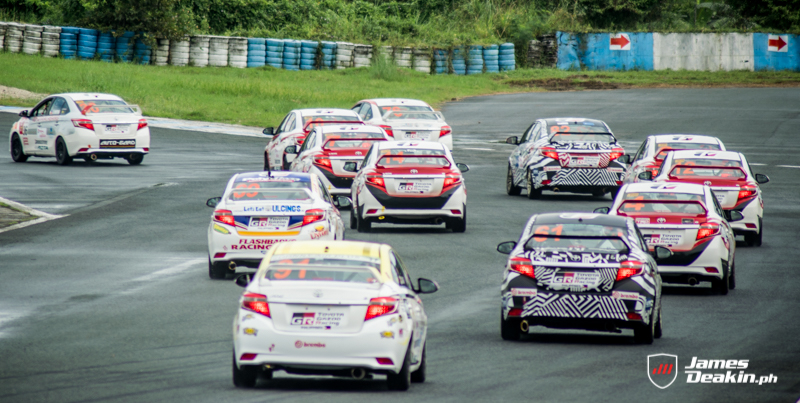 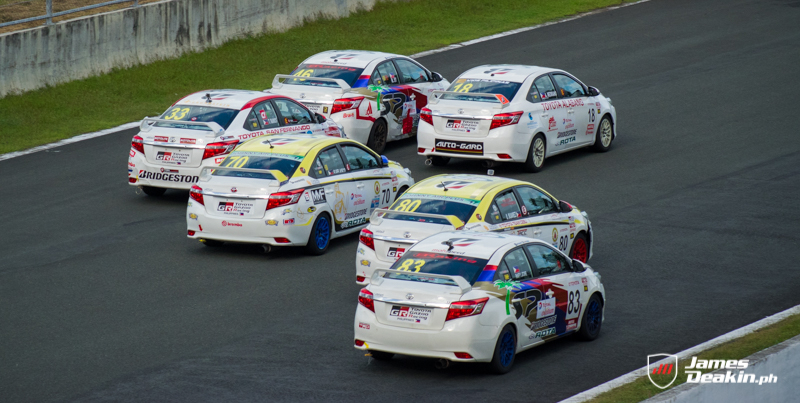 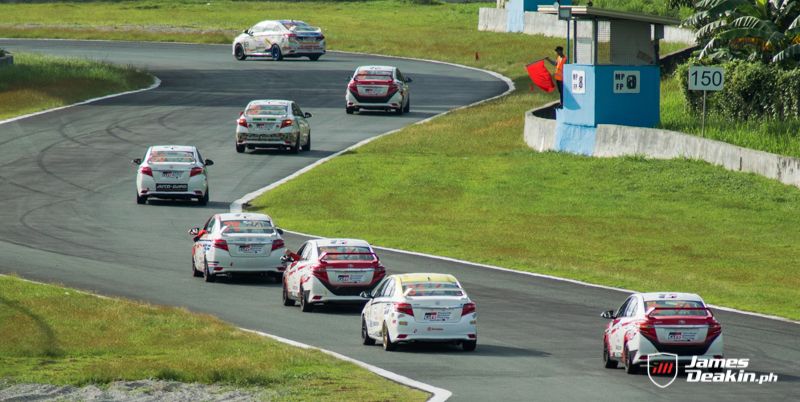 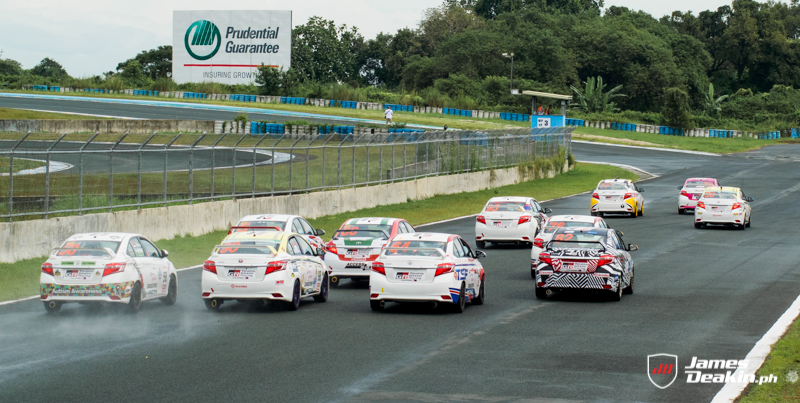 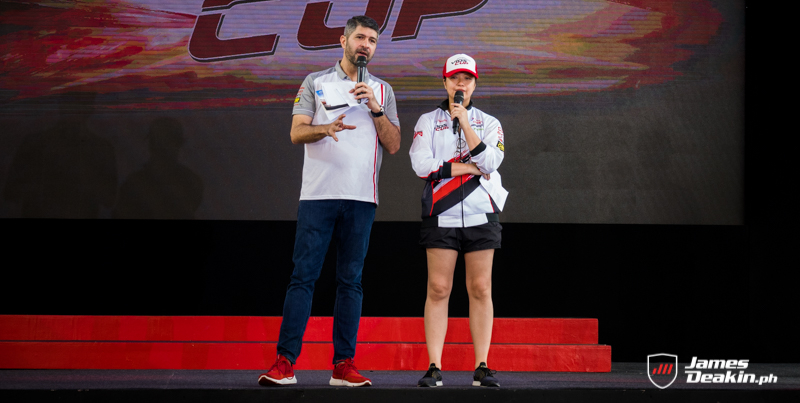 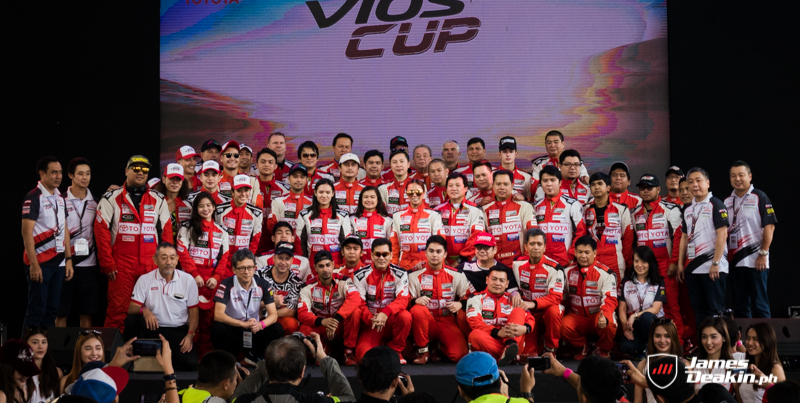