Auto racing has always been my dream world since childhood. Growing up, I used to wish that I’d become a motorsports icon someday... someone like Mika Hakkinen of Formula One fame or the Philippines’ very own late great racing legends Jose “Pocholo” Ramirez and Ferdinand “Enzo” Pastor.

However as I age, I realised that being a racer isn’t for me. This is largely due to my visual impairment posing as major safety and legal risk not just to myself, but to other people as well. I’ve come to accept this as fact. But the Higher Power works in the most awesome ways, indeed.

Case in point, I was recently given a chance to spend a weekend with a racing team called AutoPerformance Victor Hardware Motorpsort which I’ll refer to as team APM from this point on. In a way, this experience made me feel as if I’m a racing driver, too... and then some. 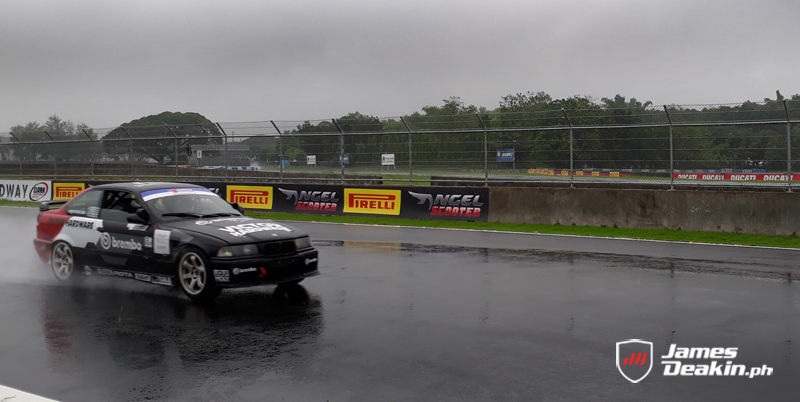 My mission was to cover the team’s journey as a contender in this year’s Petron x 4 Oras ng Pilipinas which took up the first 4 hours of the inaugural Petron Kalayaan Cup 12-hour endurance race. To be clear, both events have 5 categories; Manufacturer (no competitors at the time), FM3, FM2, FM1, and RP, with team APM competing in FM1 and RP.

These were held last June 12, 2018 at the 4.2 km-long Clark International Speedway (CIS) in Pampanga. But my immersion as an observer began days prior, June 10 to be exact.

In review, team APM was created in 2014 out of pure racing passion by a group of individuals led by Team Principal Francis Aguila. Together with fellow Team Principal Albert Chung, Team Manager EZ Ligaya, and Race Engineer Jun Magno, it gained traction and top honors in such events as Touge Battle, DTM Philippines Cup, Philippine Autocross Championship, and the Philippine Endurance Challenge. It even won last year’s 4 Oras ng Pilipinas, which means that the team is on a title defence this year. 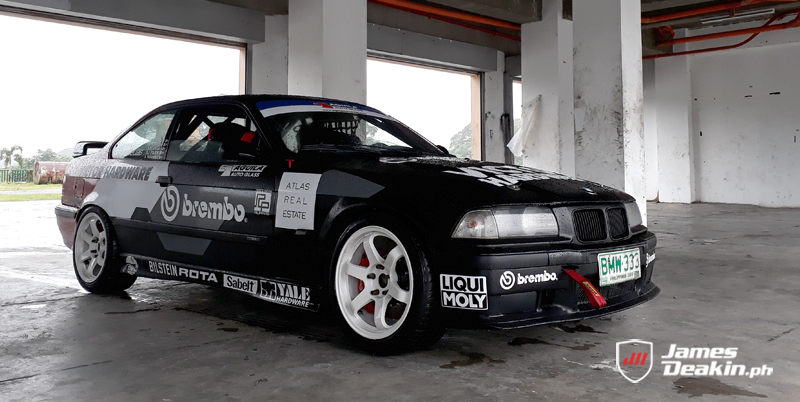 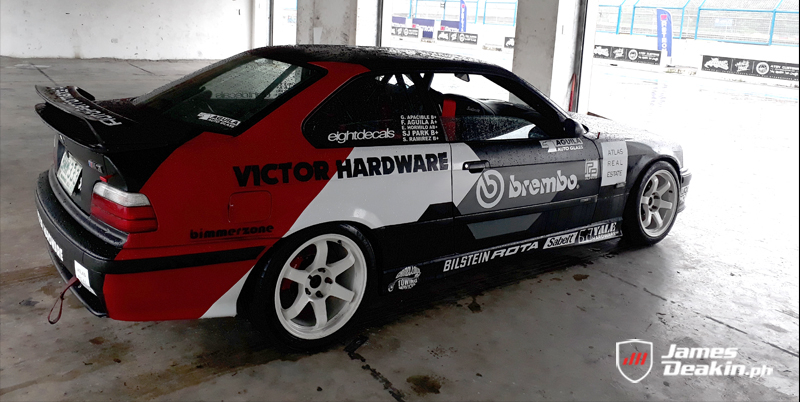 Best part is for all the said events, team APM fields just one machine; a black mid-90s BMW M3 with minor safety/suspension/brake mods and a completely stock 3.0L inline 6-cylinder mill. Why? Because as many would say, “old-school is cool,” and that the team is out to prove that with a capable car and crew, one machine is more than enough. Kinda reminds me of MacGyver and his simple yet trusty Swiss Army Knife (shoutout to ‘80s and ‘90s kids out there, eh?).

My mission started off with an early morning trip from Manila to CIS courtesy of one of the team’s crew, Paolo Arespacochaga. Soon, more of the team arrived, including Aguila and company with other crew members Stephen Alunan, Lord Francisco, Jay Jay Pompa, Jeremy San Diego, Glenn Zamora, Popo Pantaleon, and the award-winning international Filipino racer Angelo Baretto.

The crew prepped the M3 up to speed, just in time for the first round of practice laps. On site to familiarize the track and the M3 were the team’s drivers. This included George Apacible, Mig Dizon, Enrique Hormillo, Korean driver Sung Joon “SJ” Park, Stefan Ramirez (grandson of Pocholo Ramirez), and Jeff Borja. 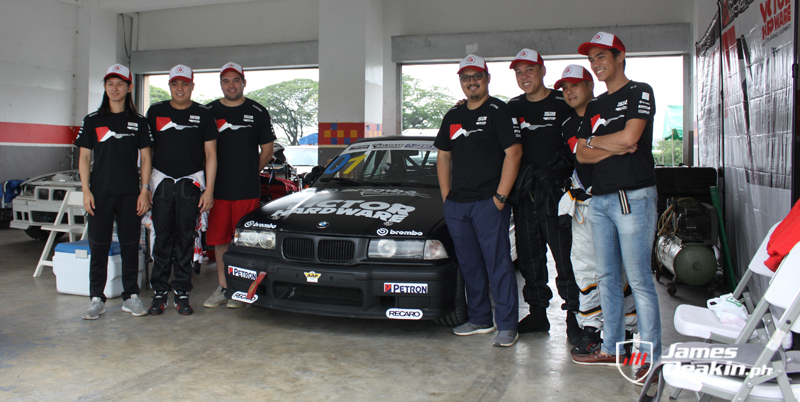 Borja was assigned as a last-minute replacement driver for Aguila who was supposed to race that weekend as well. That’s because Aguila suffered a back injury days before the race. But this didn’t hamper his participation as he worked hard on the sideline as one of the advisors that guided the team on the right directions.

Although some of the drivers have more racing experiences, all have one thing in common - the will to win. But this was tested by an on-track incident which almost ended the team’s battle.

Due to the onslaught of Typhoon Domeng and the southwest monsoon (habagat), the entire track was soaking wet with slippery surfaces and scattered oil slicks. All things went smoothly despite the rain, but one of the drivers caught an oil slick. As a result, the M3 lost traction, careened out of control, and hit the wall hard. Thankfully, the driver was okay, but the same couldn’t be said for the M3. 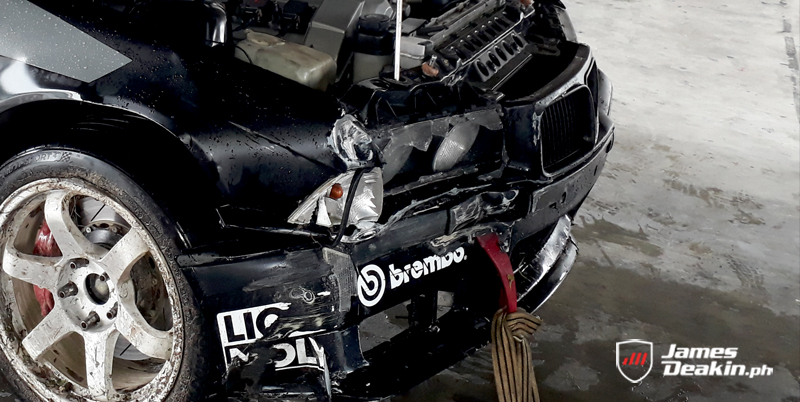 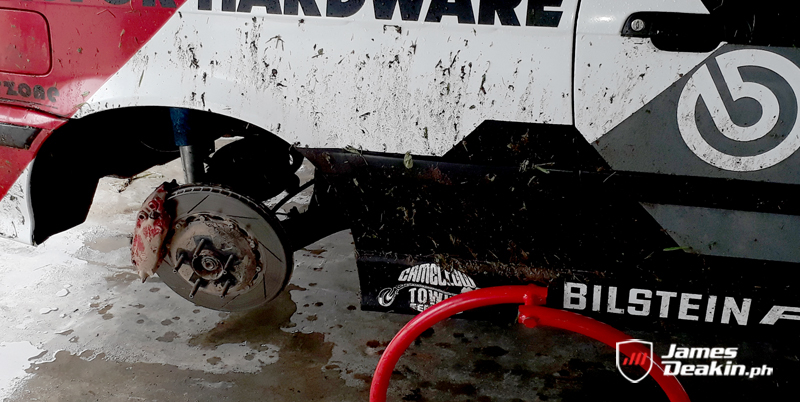 It sustained heavy damage up front, including a broken windshield, severed suspension arms and a slightly-bent chassis, among others. The team had no choice but to abort the practice session, to think that it’s the last practice day before qualifying. With Aguila and Magno in command, the crew sprung into action, assessing the M3 and repairing as much damage as they could.

As the evening fell, the repairs were just halfway complete. All hopes seemed lost, until Aguila received a message saying that loads of new parts from Manila are on the way, including additional men to speed up repairs overnight - a timely blessing indeed.

The crew went through with the repairs just in time for the morning’s qualifying heats. I must say that they did exceptionally well as the M3 appeared as if nothing ever happened to it. It even had some new decals which made it look cooler than it was yesterday.

For its qualifying stint, team APM picked Ramirez as the one to put the M3 on pole. And he did just that, despite the rain and poor visibility. He placed 4th in RP Class and overall on the grid with his best lap time of 2:35.582. This also placed him 1st in FM1 Class. The team called it a day, just in time for the afternoon snacks. 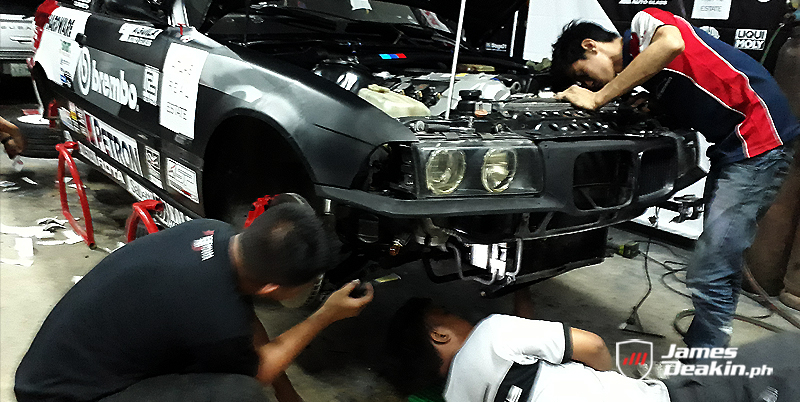 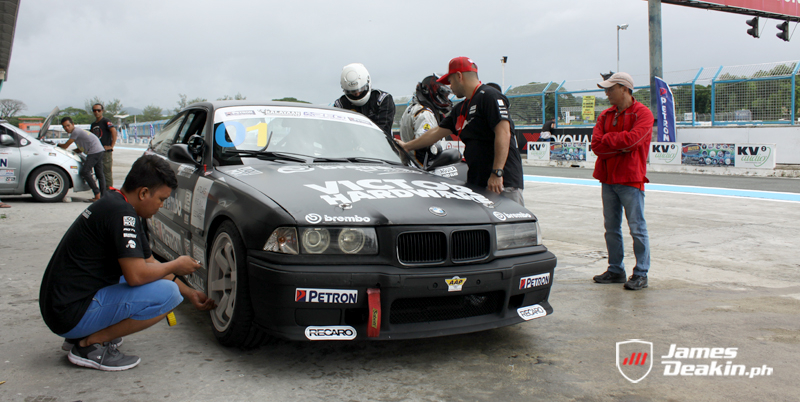 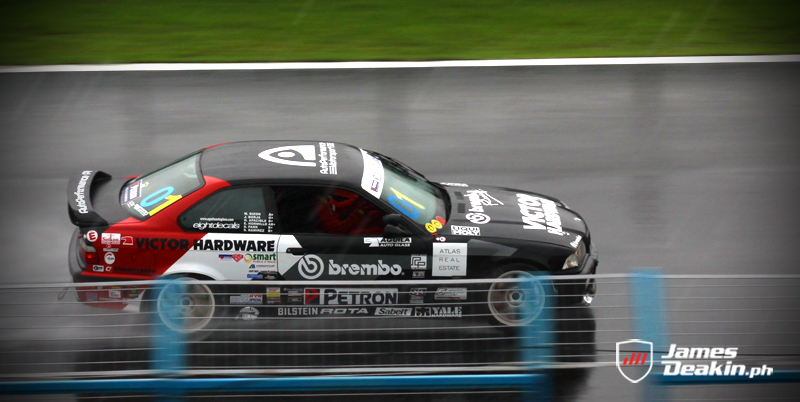 Finally, the time has come. It’s the 2018 Petron x 4 Oras ng Pilipinas and the first ever Petron Kalayaan Cup. As earlier said, these events were combined to form a 12-hour endurance race with the former taking place during the first 4 hours of the latter – a true test of man and machine against each other, against time, and against Typhoon Domeng. On the grid were 23 cars.

Heading out first for team APM was Ramirez. The race went underway at exactly 5:45 am. Though considered sunrise, the sun never shined bright as Typhoon Domeng continued its reign, making racing conditions all the more challenging. 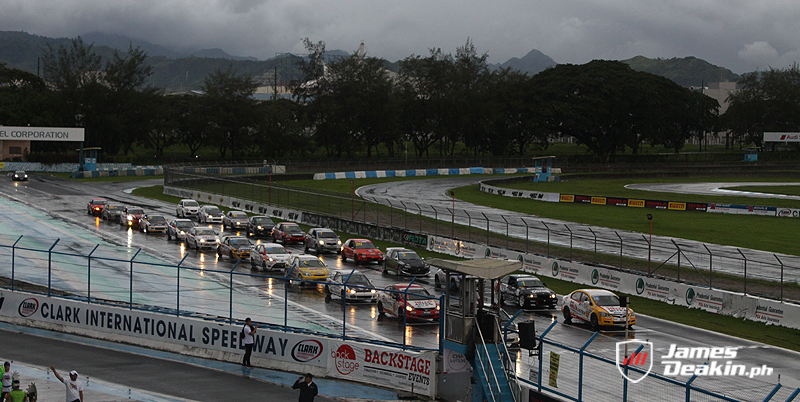 There were a number of minor spin-outs and incidents in the first 3 hours, but thankfully, Ramirez came through unscathed. These incidents prompted the safety car to take multiple trips in and out of the track to herd the cars as the marshals scrambled to rid the track of mud and debris.

By 8:20 am, the team made its first pit stop. As per race rules, only 2 crew members are allowed to touch the car. After a quick refuel, Ramirez handed the wheel to Park, and off he went to continue the race.

The Petron x 4 Oras ng Pilipinas ended at exactly 9:45 am, but Park soldiered on until around 11:20 a.m. to pit the M3 and pass driver duties to Hormillo. After another refuel and quick cleanup, Hormillo went out of the pits just as the safety car passed by due to another spin out. 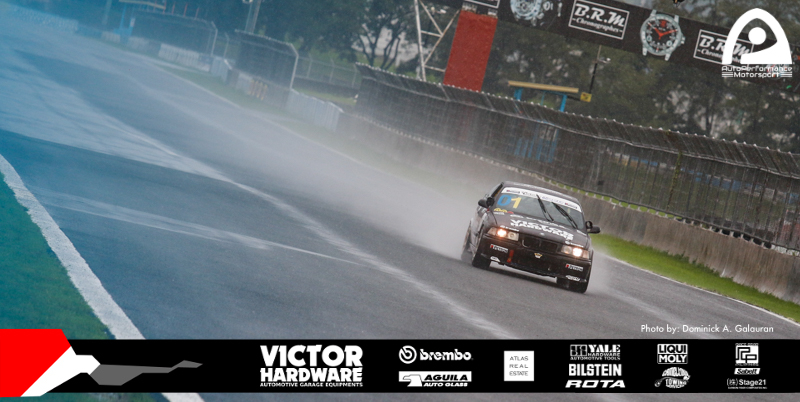 It’s amazing how the team handled every pit call with precise clockwork. Chalk it up to commitment, dedication, and teamwork to make things count. As I observed, I came to realise that racing isn’t solely focused on on-track activities as half the action is taking place off-track.

There were tense, frustrating, and even funny moments down in the pit and up the 2nd floor viewing room where Aguila, Baretto, our time-keepers, and myself are located. Ligaya, who went up the 3rd floor viewing deck for a bird’s eye view of the race was just as ecstatic, radioing the action for those of us unable to see further. 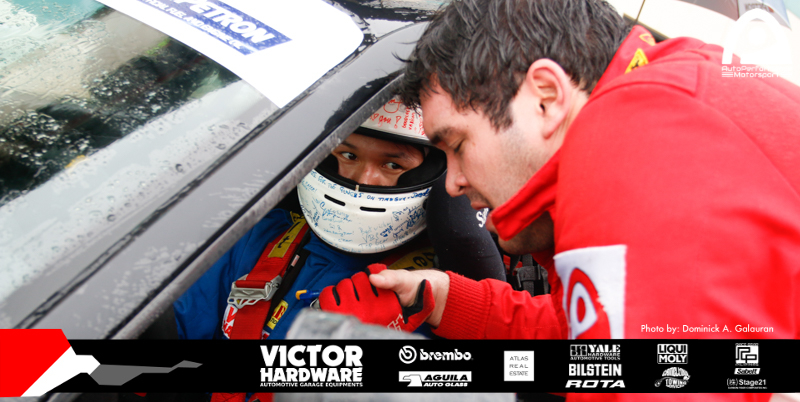 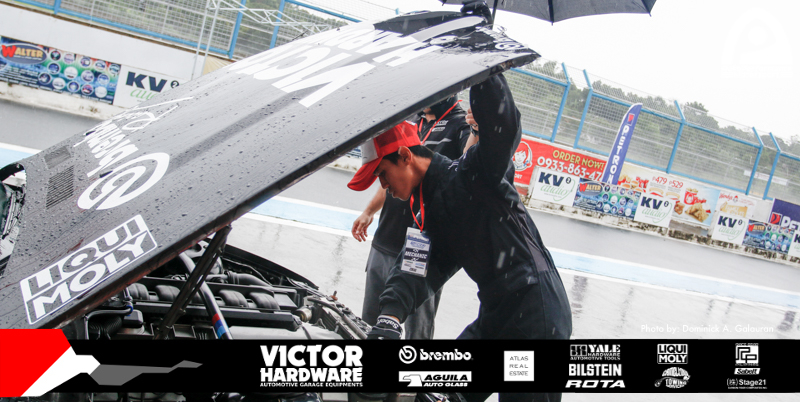 Too bad though because my shooting arsenal isn’t well-suited for racing photography, not to mention shooting under the rain. This responsibility fell in the hands of Dominick Galauran, the team’s official lens man who mustered all his skills to go out and snap some cool shots with his race-ready, rain-ready gear.

As the clock reached 1:20 pm, Hormillo came into the pit to handover the seat to Borja. By this time, team APM was leading in FM1 Class by a few laps and a position down in RP Class. Borja made a safe run and pitted in at around 2:30 pm to pass driver duties to Apacible. 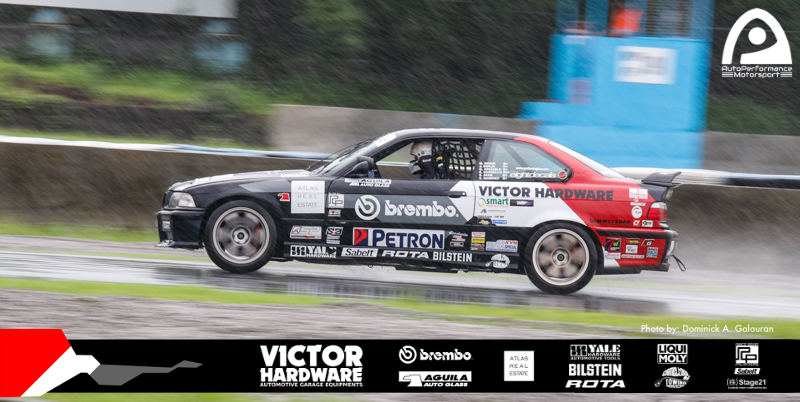 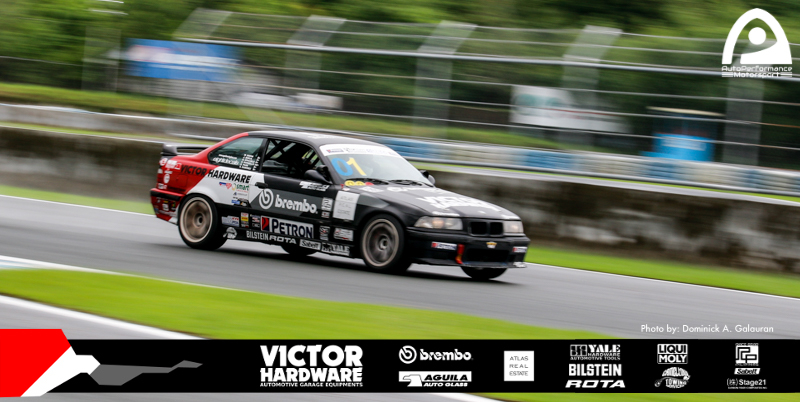 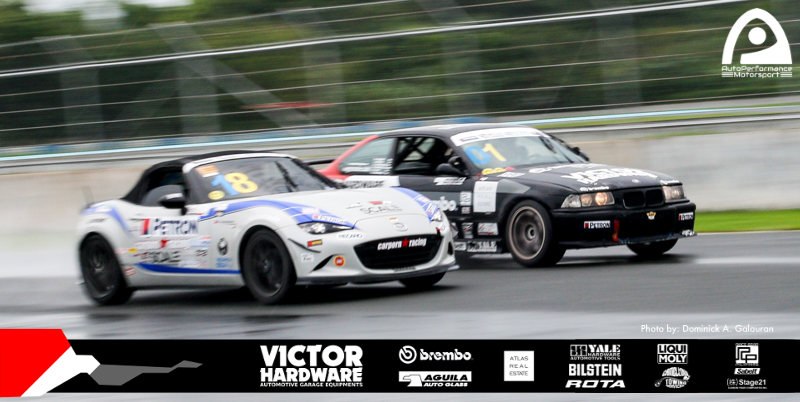 With decades of racing experience under his belt, Apacible took the M3 on a blistering series of laps around CIS. He’s very much in the zone to the point of establishing a 6-lap lead overall. It wasn’t all easy for him though as his nearest rival kept the pressure high. By the time he went in the pits at round 4:30 pm, his lead was cut down to just 3 laps.

But things turned out for the worse during his pit stop. As per the race stewards’ call, he over-sped his pit entry, resulting to a drive-through penalty. As the last driver to board the M3, it’s up to Dizon to step up the game. He went out the pits for a lap and went back in to serve the penalty, only to over-speed his entry as well. This caused the team to suffer 2 drive-through penalties, cutting its lead down to just 2 laps. But it’s not over yet!

Everyone in the team was at the edge of their seats, praying, and crossing fingers for the better. And it did as Dizon maintained that 2-lap lead with just 15 minutes left on the clock. As the checkered flag waved at exactly 5:45 pm, Dizon crossed the line 1st, defending that 2-lap lead up to the very end, much to the cheers of the whole team. 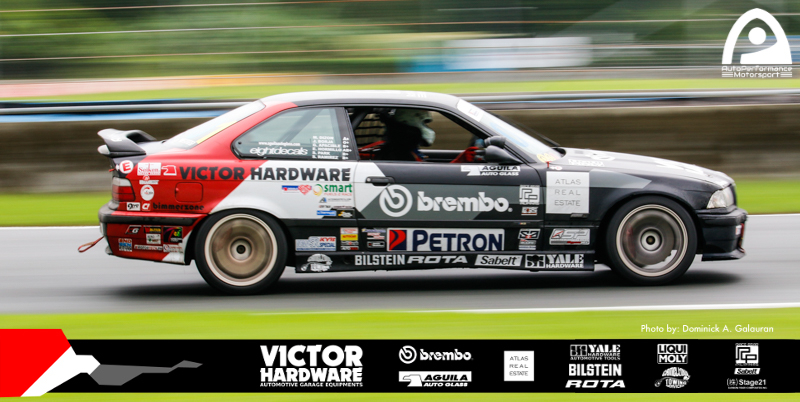 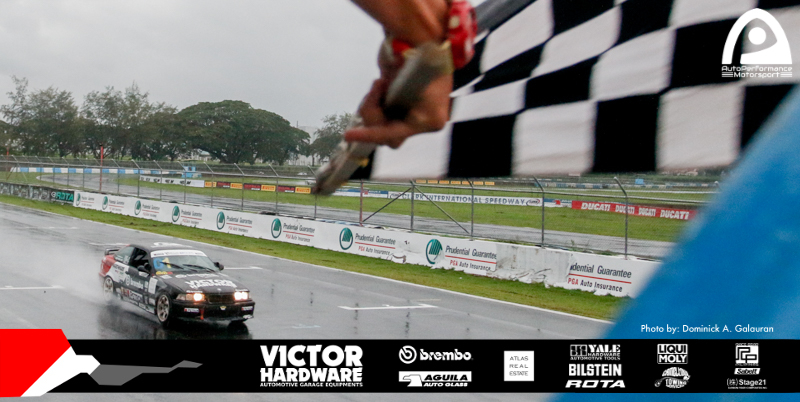 At the end of the day, the official results said that team APM didn’t make it to the top 3 FM1 and RP class winners of the 2018 Petron x 4 Oras ng Pilipinas. But loads of blessings came when it was called out as the first ever overall winner of the Petron Kalayaan Cup. Moreover, it clinched the FM1 and RP classes as well - a truly epic and historic victory against all odds.

Calling it a day and a storybook ending to what was an unforgettable journey, I felt a new and better appreciation for the local motorsports scene. I’ve seen the glamorous and non-glamorous side of it. I am very thankful for team AutoPerformance Victor Hardware Motorsport, especially to Francis Aguila for letting me witness his team’s struggles and success. May this be the start of greater things to come. 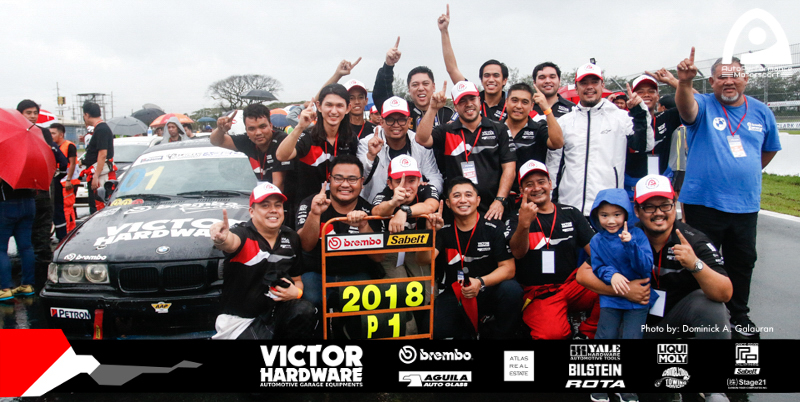 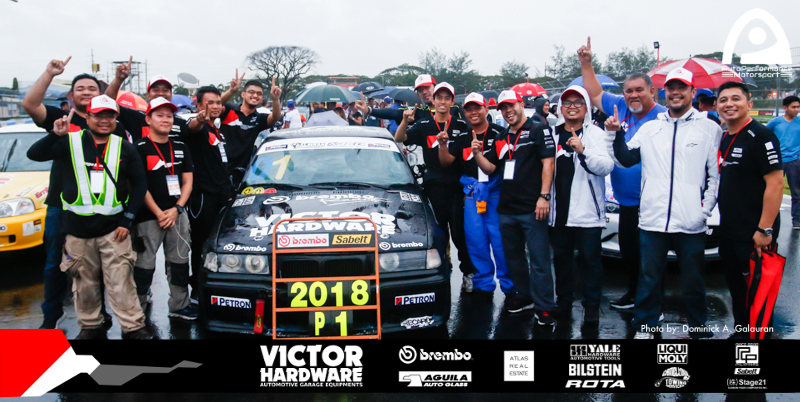 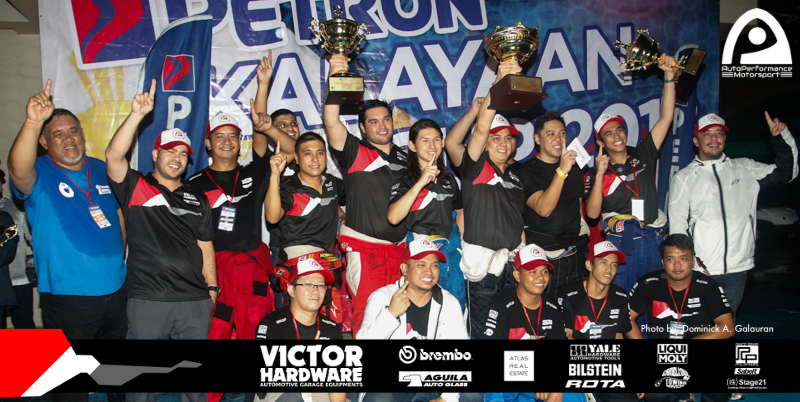 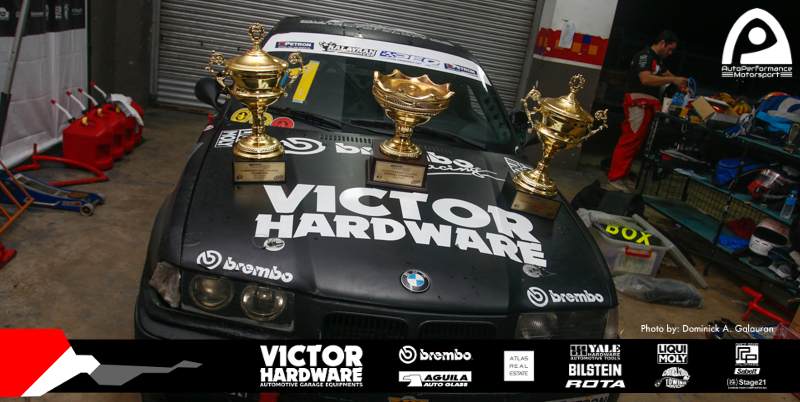