The I.D. Buzz is the Iconic VW Kombi’s Electric-Powered Grandchild

Remember the Volkswagen Kombi? Of course you do. Kids who grew up in the 1970s and 1980s most likely had one as a family car, or had friends whose folks owned one. It’s as iconic as can be, with flower power and the peace revolution written all over it. Now, Volkswagen wants to make another revolutionary move with the new generation VW Microbus.

This Microbus (aka Kombi to most Filipinos) is no ordinary transport vehicle, however. The I.D. Buzz, as VW calls it, is an all-electric multipurpose vehicle for the next generation. The I.D. Buzz concept derives its name from words like Idea, Identity, and Iconic Design, as well as Buzz, which is a wordplay on bus. 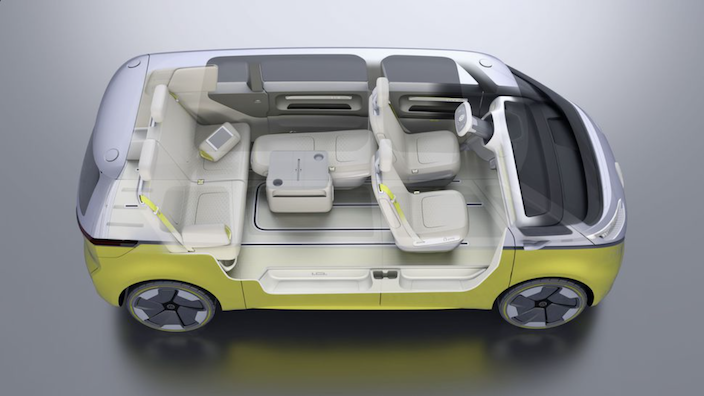 While it may look like the grandson of the hippie bus most of us grew up with, underneath are two electric motors, one up front and one at the rear. Situated at each axle, they both give a combined system output of 369hp and allow the bus to scoot from rest to a hundred km/h in a quick 5 seconds.

Families or active individuals worried about range will be happy to note VW’s claim of around 600kms on a single charge. Topping up can be done using a Combined Charging System, or even an ordinary wall outlet at home. VW says that one 80 percent charge can be reached in as little as 30 minutes. And those that don’t need the long distance capability can switch the 100kw/h batter to an 88kw/h one, with a lesser yet still powerful 268hp, located at the rear axle. 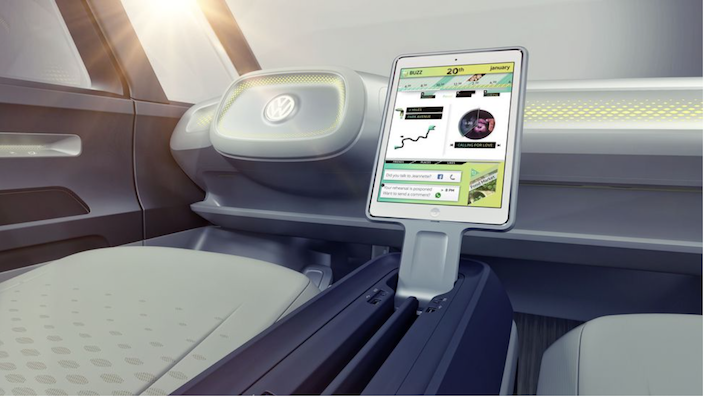 Besides the electric motor, the I.D. Buzz is also a showcase in next-gen technologies, particularly autonomous driving. At the simple tap of the steering wheel, the tiller can retract into the dashboard, switching the vehicle to fully autonomous mode. The white ambient lights transform to mood hues, for a more relaxing vibe. And augmented reality displays are then shown on the various tablets located inside the cabin.

Using laser scanners and other sensors, the I.D. Pilot will not only take over driving duties but will ensure that the journey is safe and relaxed. Vehicles, obstacles, and other dangers are easily detected and dealt with in a safe manner. Should the driver wish to take over once again, all he needs to do is tug at the wheel or press the accelerator or brake pedals. 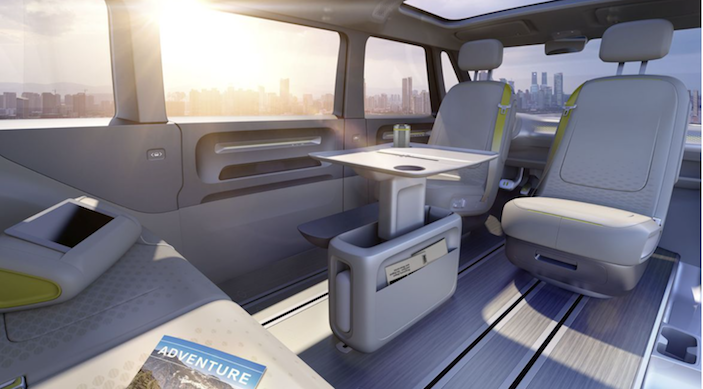 And this being a Microbus for the future, the cabin is a study in space utilization. Thanks to the floor-mounted electric battery and motors, the long wheelbase and huge inner quarters are fully maximized. Occupants can stretch out or load cargo with ease. And with the new connectivity technologies set to be rolled out, the I.D. Buzz is a virtual rolling office and entertainment center.

Of course, the exterior shows off the brand’s links with the past and looks ahead to the future. The Silver Metallic/Cyber Yellow Pearl two-tone paint scheme are reminiscent of Kombis of the past, while the headlights that mimic the human eyes and their various stages of emotion and activity are just one futuristic touch. All told, this is one car that will look cool to any generation.

The Volkswagen I.D. Buzz makes its world premiere at the North American International Auto Show in Detroit. While it may still be a concept, the I.D. Buzz gives us an idea of VWs to come. And the good news is, the legendary Kombi may just be part of our motoring future once again. 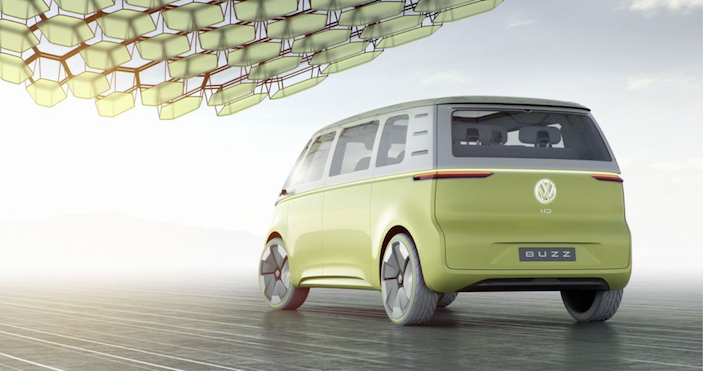