(in photos: Audi's Pop Up Next, a project with Italdesign and Airbus)

Readers who closely followed the Geneva Motor Show may have noticed that besides the slew of new car launches and concepts, one of the major highlights was the flying car. We even gave you a closer look at the PAL-V Liberty, a flying car from Dutch manufacturer PAL-V that acts both as a road going vehicle and an airborne conveyance.

Apparently, the Dutch aren’t the only ones hard at work trying to get us up in the air. Audi, together with Italdesign, likewise presented the Pop Up Next during the show in Switzerland. The concept is a collaboration with aerospace giant Airbus that serves up a quadcopter that is attached to a motorized base.

In theory, it is an electric car that can detach from the base and fly off with the help of the qudcopter. Italidesign says that it is an electric, zero-emissions autonomous vehicle that is designed to help solve traffic in congested urban areas.

The Audi-Airbus-Italidesgn Pop Up Next is envisioned as a ride-sharing service with the motorized vehicles ferrying passengers around town. This is complemented by the quadcopter that would pick up these passengers and take them across town much faster—in the air. 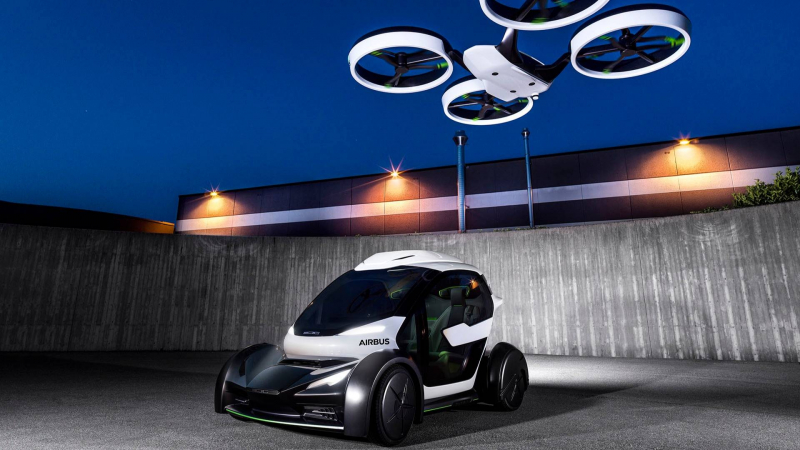 Porsche is said to be working on a similar system, also with Italidesign. Just like its sister company, the Porsche flying car would most likely be a taxi service for the skies. The German sports car maker is in the early stages of penning a blueprint for the said vehicle, hoping to see one in flight within the next 10 years.

And yes, other companies such as Daimler and Chinese auto giant Geely are also dreaming of flying cars. Daimler, it will be recalled, was one of the companies that invested in the development of Volocopter, a five-seat flying taxi that is capable of Vertical Take-Off and Landing. Geely, on the other hand, recently purchased Terrafugia, a U.S.-based flying car developer. This one could hit the skies as early as next year.

With all these, it would only be a matter of time before that wish to simply fly to our destination becomes a reality.