So what does the Ford Ranger Raptor have to offer?

If you’ve been following this space, you may have read that the Ford Ranger Raptor will soon make its way to the Philippines and other markets in Asia. Launched earlier this year, the Built Ford Tough truck that’s been beefed up by Ford Performance is touted as the most capable pickup in its class.

While most owners may never push this rig to its limits, it’s comforting to know that it can go further than you ever will. But how capable is the Ranger Raptor you ask?

If its 283mm of ground clearance is anthing to go by, then we’d say that this truck will definitely go far. Putting this into perspective, most SUVs and pickups in the market today are raised by some 220mm. This means you won’t need to wory about rocks, buolders, and especially those pavements and sidewalks cramping your style (or scratching the truck’s underbelly).

Speaking of style, the tough exterior isn’t just for good looks as it offers a bit of functionality to boot. The fenders, for instance, are made of tough materials to give you added confidence that its okay to scratch them when traversing the trail less traveled. The front bumper-mounted fog lamps have air ducts for added aerodynamic efficiency.

Of course, looking  tough is one thing. Being tough is another story altogether. Equipped with  a 2.0-liter bi-turbo diesel motor that puts out 210hp and a stump-pulling 500Nm of torque, the Ranger Raptor promises strong acceleration and more importantly, earth-moving torque to help you stay out of sticky situations in the great outdoors.

This is backed up by a truly capable 4x4 system. This means it has a special drive mode on the Terrain Management Sstem known as Baja Mode that’s ben tested and honed in no less than Mexico’s Baja Desert Rally. And if it can hack it in this harsh environment, it will definitely hold its own in our urban jungle.

Of course, a balance of capability and comfort is assured by FOX’s Position Sensitive Damping that allows it to be as comfortable on the highway and as tough while roughing it. And with twin-piston caliper-equipped brakes, excellent fade-free stopping power is always assured.

But more than just being a go-aywhere machine, the Ranger Raptor is likewise an efficient and safe one. Its 10-speed automatic means optimum gear ratios that provide both excellent acceleration and fuel economy. Moreover, the latest driver aids will do their bit to keep you and other road users out of harm’s way. Think Stability Control with Roll Mitigation that will keep this tall rig from tipping over.

As for convenience and style, Blue Stitching on the seats mixed with leather accents add to the premium vibe while still making it tough as nails in order to cope with the rigors of the great outdoors. And the Satellite Navigation system even has a cool breadcrumb feature. Anyone who’s read Hansel and Gretel will know that  it was precisely the breadcrumb trail that helped them get out of that sticky situation they found themselves in.

So whether it’s the great outbacks of Australia, theBaja Desert in Mexico, or Manila’s harsh urban environs, the Ford Ranger Raptor promises to remain as composed and tough as ever. Experience it at your Ford dealer real soon. 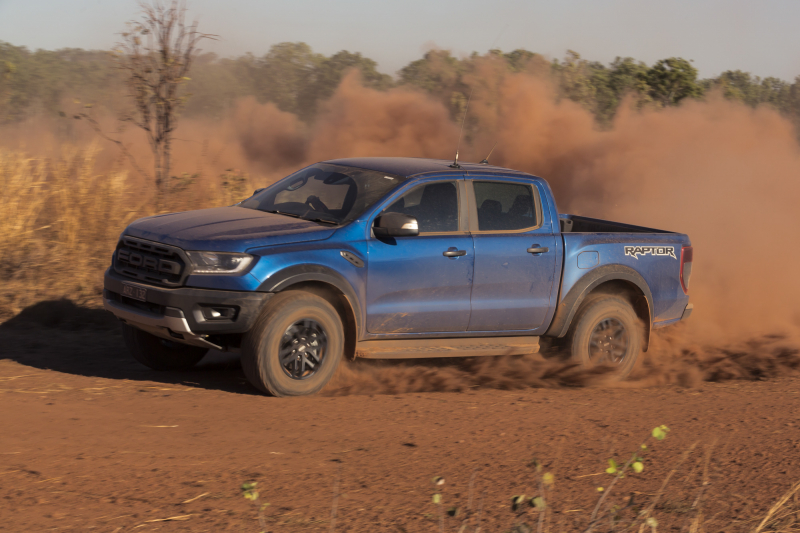