My 2 cents on the Montero Sudden Acceleration Scandal

In line with the recent online attacks against Mitsubishi regarding several alleged cases of ‘sudden' or 'unintended acceleration’, I felt it was only fair to come out with this piece for no other reason than to respect everyone’s right to have their side heard before getting thrown into cyber prison without a password.

The news reports, in case you missed it, show numerous owners recounting their harrowing tales of horror as their 'possessed' Monteros plunge into parked cars, turn turtle, or end up in walls or other immoveable and unforgiving objects––like  Facebook, Twitter and other social media courts. Personally, I must have received over 150 messages in one day demanding a comment, an expose, or a Mitsubishi executive’s head on a used air filter.

And fair enough, too. Nobody wants to live in a world where SUVs can accelerate on their own free will.
But as frightening as it must have been for those involved, let’s try not to get too caught up in the fairy tales either. Because at the end of the day, everyone deserves the right to a fair and balanced trial––and sad to say, that is far from what happened here.

Let's just take the recent report of the guy in the police station parking lot that reversed and accelerated forward. The guy did not hit the brakes. Period. We know that because the brake lights did not illuminate before or during impact, but clearly does so in the unedited clip. So he either lied, or was genuinely confused, but either way it didn’t seem to stop the hordes of people from coming out with their virtual pitchforks and suddenly accelerating to their own conclusions––by which stage, the facts were of no use anyway because some people had already made up their minds and were not willing to let the truth get in the way of a good story.

But if it is any consolation, stories like these are as old as the automobile itself. On November 23, 1986, 60 Minutes aired a segment on the Audi 5000 that exposed a supposed problem of "unintended acceleration" when the brake pedal was pushed––complete with the emotional interviews of six people who unsuccessfully sued Audi, including one woman who had tragically killed her six year old boy.

Shocking footage was shown of an Audi 5000 with the accelerator moving down on its own, accelerating the car, which naturally terrified the courts and the television viewers. Tests by Audi and independent journalists showed that even with the throttle wide open, the car would simply stall if the brakes were actually being used, but like the Montero, the question was that it should have never happened in the first place.

Eventually, after going through a nightmare PR gauntlet, the case was closed after it surfaced that the expert witness turned out to be employed by one of the plaintiffs and admitted to modifying the car with a concealed device to cause it to do so. It's one of the biggest scandals to hit American media, but tragically, in the end, despite the court victory, it took 15 years for Audi to recover its sales in the US.

Let’s not also forget what happened in the US last 2010 with the (then) number one automaker, Toyota, suffered a similar, albeit incredibly larger scaled version of a similar attack that even had their chairman hauled in front of congress to explain himself.

It is almost impossible to put a price on the damage that Toyota sustained from the debacle, but after a 10-month “exhaustive, thorough study" of Toyota’s electronic throttle controls, the National Highway Traffic Safety Administration (NHTSA) and NASA reported that they found no evidence that electronics were to blame for alleged unintended acceleration in Toyota vehicles, making it perhaps the most expensive witch hunt in modern automotive history.

“So let me be clear: the jury is back. The verdict is in.” Transportation Secretary Ray LaHood told a packed news conference in Washington, D.C. “There is no electronic-based cause for unintended high-speed acceleration in Toyotas. Period.”

NHTSA and NASA rigorously examined nine vehicles, pored over 280,000 lines of software codes and bombarded the vehicles with electro-magnetic radiation and found no flaws in Toyota’s electronic systems. The report noted that the only possible causes of alleged acceleration incidents were trapped floor mats and sticking pedals, both of which have been addressed by Toyota’s recalls.

While I'm not electromechanical engineer, if I was to base my opinion on having driven thousands of different cars, personally, for whatever it's worth, I don't believe it. I do believe that floor mats can get caught, people can get confused, and even poorly maintained cars can suffer a 'sticky' pedal, but I do not believe that a car––any car––can not be slowed down by the brakes even when the accelerator is depressed. Go ahead, try it. Pick an empty patch of road, put your foot on both pedals and see what I'm talking about. The car won't move. In rear wheel drive vehicles, the tires may spin if the traction control is off, but in either case, it will not accelerate forward.

This is not to say that I’m suggesting that everyone that has experienced an 'unintended acceleration' is lying; I’m only asking that we extend Mitsubishi the same courtesy––even though the irony here is, the ones making the biggest noise about it, are the ones helping Mitsubishi. Just like the guy who claims he hit the brakes in the police station car park when he clearly didn't, then went to the press to expose it, only to ask for his face to be blurred on TV.

The sobering truth here is that many people do not want to accept responsibility for their actions. You just need to have been involved in any traffic accident here to know what I'm talking about. Even when someone clearly rear ends your car, once you are down at the police station or trying to follow up your claim, I guarantee you that the story will have changed and you will hear either "I lost my brakes" or "You suddenly swerved in front of me" All the excuses under the tropical sun, but rarely, if ever, an admission of fault or willingness to accept responsibility.

Same goes for these Montero SUA cases. One guy claimed it happened to his dad a few years ago, wrote a blog that went viral, all of a sudden, there are almost a hundred cases out there. It's as if every single accident out there involving a Montero gets dumped in the SUA basket. No different to what happened in the US after Toyota, as you will see in this graph from Car&Driver magazine. Reports skyrocketed over 20 times once the story was released in media. It becomes an excuse. A scapegoat. An easy way out. 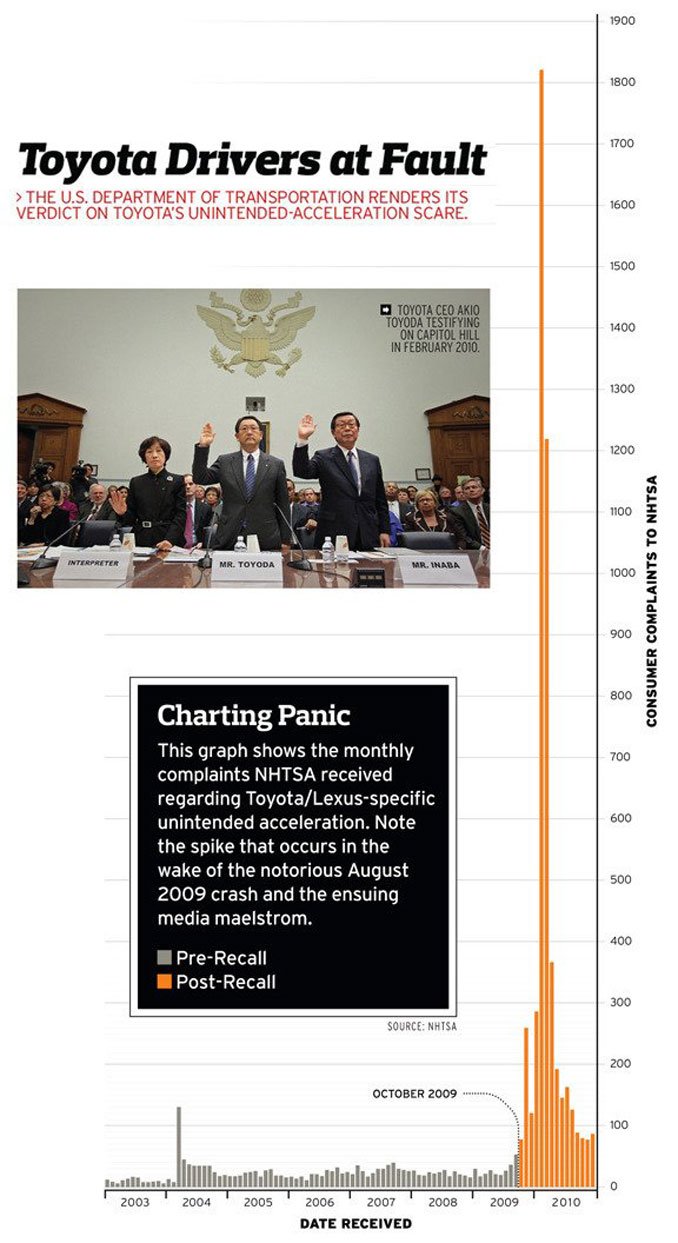 I’m all for safety, and I am certainly not trying to make light of what would no doubt be a traumatising incident for some, but as sympathetic as I am to those who genuinely believe that an electrical or software fault caused their car to suddenly and uncontrollably accelerate on its own, the fact remains that despite all the extensive studies carried out by independent agencies and even NASA, there has never been a proven case of  sudden acceleration––whereas the reverse remains true regarding driver error or fraudulent claims.

Yes Toyota had to payout $1.2 billion in 2014, but that was not an admission, but to avoid even more in litigation costs and further damage to their reputation. Because sadly, at the end of the day, just like Toyota, despite all the technical evidence being in Mitsubishi's favour, there is no appeal in the court of public perception.  And if you ask me, while I do believe there are some cases of those who may genuinely believe (even mistakingly) that their vehicles accelerated on its own, I think this issue has grown into a smear campaign that is now laced with all sorts of ulterior motives. Once again, not necessarily from everyone, but ironically, from the opportunists that have joined the band wagon and have now completely accelerated things out of control for everyone.