According to a recent report, South Korea has just overtaken Brazil as the world’s leader in cosmetic surgery. Not be outdone, the Philippines has answered back with an even bigger industry called cosmetic security. This is a booming business that promises increased safety, customer protection and corporate peace of mind; in reality, however, it’s about as useful as a silent letter. Nice to look at, but largely without function.

Take our carpark inspections for a start. Next to penny loafers and pet rocks, this has got to be one of the most successful scams ever sold. Seriously. They start by setting up a checkpoint that forces cars to idle in lines long enough to name a hole in the ozone layer after them, only so they can dutifully shove that mirror under your car and take a token glance in your trunk. But if they don’t spot anything that looks like a bowling ball with a fuse, or a wooden barrel with TNT on the side, you may as well be invisible.

Then, once you’ve made it through, it’s off to the entrance of the mall or building, where even more of these ‘silent letters’ will frisk you down and poke through your bag with a magic wooden stick looking for deadly objects that you can freely buy once inside the mall. Like guns, knives, hammers and acid. 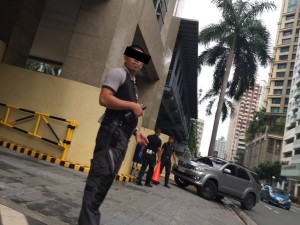 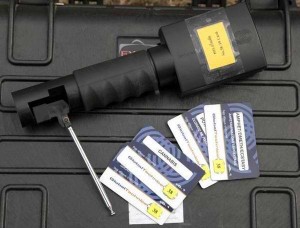 I once sat in a coffee shop just by the metal detector at the entrance of a mall and watched in awe as hundreds of shoppers walked through while it beeped incessantly.   A full twenty minutes went by and the machine never once stopped beeping with each body that went through. I genuinely wondered if it needed to burst into flames before they deem it suspicious, because nobody was pulled aside.

Then there are the buildings that ask you to sign in and leave ID but never check if the information matches. As a point, I write down the names of random cartoon characters just to see if anyone cares. Not once have I been questioned, although I did once get thanked as sir Goofy.

But my personal favourite is when the security guard asks “What is your purpose.” I usually reply with: “Well, firstly, thank you for the question. I’m leaning towards world peace, but right now I just need to catch a meeting on the 11th floor. I’ll be back for the swimsuit round.”

Let’s not even get started on villages and airports. 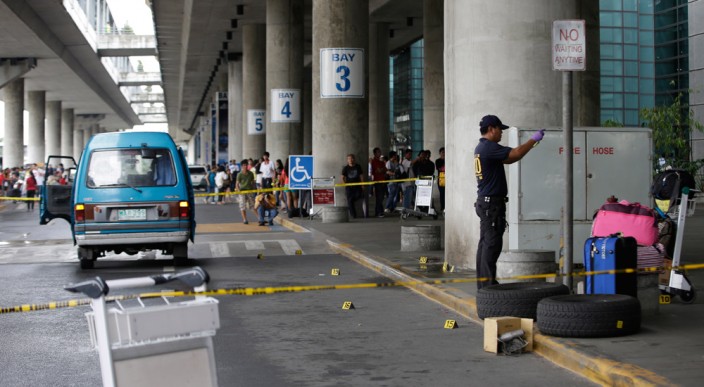 With all the security checking every car, gunmen were still able to enter the NAIA 3 and open fire without any problem.

I’d be okay with all of this if it meant that when something finally went down we could trace our way back through all these security layers to catch the crooks. But no. Because you realise that when it comes down to it, we are being sold nothing more than the equivalent of whitening soap.

Case in point, my laptop was recently stolen out of my hotel room in Fontana Leisure Resort in Clarkfield, Pampanga last month. This place has more security guards than trees. Yet not one of them were able to either prevent the break-in or solve it. They were, however, all able to verify without a shadow of a doubt that my villa was in fact burgled. They even gave me the specific time. “Exactly 3:29pm” sir/mam. But if I happened to be looking for anything more than the painfully obvious, they were fresh out of answers.

Turns out that the culprit was a man in a black shirt that cloned my room key. I know this because he entered my villa in full view of the security guard that was posted right across. I’m even willing to bet that he left an ID or at least showed one at the gate, or had his car ‘inspected’ if he drove in, or his bag poked with the magic stick if he arrived on foot; end of the day, 6 weeks later, we may as well be looking for the second shooter from the grassy knoll. But if you click HERE you will read in the comments that it happens all the time.

Once again, it’s not the need for security that is in question here; it’s the whole  pointless and patronising charade that surrounds it. If it were effective, then fine. But when you know, that I know, that we both know, that you’re really only going through the motions, what’s the point? Who exactly are we dancing the conga for?

Yet day in and day out, it happens. And security agencies are literally laughing all the way to the bank thinking up new ways to peddle fear and paranoia at our expense. Currently it is already a multi-billion peso industry, but even more serious than the passed-on costs of manpower is the stolen time; imagine for a moment that each layer only adds an extra minute to a person’s day, then multiply that by even half the population.

It was fine and dandy 30 years ago perhaps. But traffic and congestion has already hit epidemic proportions here in Metro Manila and other capital cities that it should already be deemed a crime to deliberately add to it for no good reason. In fact, I’m all for supporting any new law that treats wasting someone’s time the same as taking his money. Because until we start treating them as one and the same, we will all continue to be robbed. Silently.