LTO finally issues plastic cards for licenses, but mixes up photos of drivers.

A reader writes in and tells me that he finally got his plastic card driver’s license. “Hallelujah” I thought. But just as I was about to check the weather in hell to see if it had finally frozen over, along comes the kicker: “But sir, the thing is, it’s not my face on the card.”

“What do you mean it’s not your face on the card?” I replied. “Maybe you picked up the wrong license?” “No, sir.” He replied. It’s my name. My address. My license number. My everything. Well, everything except the picture.”

I swear, even with all the monumental blunders this agency has committed, I honestly thought I was being punk’d. I mean, seriously. Just a few days after announcing that millions of pesos of metal sheets for number plates went missing from the LTO compound, along comes this.

Turns out that the LTO have changed printers––or so they say––and the mix up has happened more than once in one branch alone.

Now that in itself is very worrying, but when you consider that if the photos are swapped, that generally means the mistake most likely comes in pairs––which would double the casualty rate for every report. Sort of like how when someone comes home with a shoe box with two right shoes; it usually means that there’s someone out there with two lefts.

Still thinking someone was trying to blow my airbag, I asked for more proof first. So he sent me his passport and newly acquired license. Sure enough, they are two completely different people in the picture. He just asked that I blur it out if I publish it because he wanted to remain anonymous.  The following is a verbatim account of the story:

“Sir, I would like to ask if someone already mentioned to you the issue of wrong picture printed in the driver license? I had this experience when I got my license last week. I was thinking who's at fault regarding this since Lto is saying it is the fault of the printer. Lto is saying that they changed the printing company and it might be the case that the there was an error in the printer. Although I was telling them that the database is from LTO and it must be the case that their also at fault. Anyway, what pisses me is when I asked them how could they remedy that. LTO SM manila told me that I have to go again to an LTO office, not the one from malls, and have my picture taken again. I told them, why can I have my picture taken here in your office noting that no one is in line during that time. Then the supposed head of lto sm manila told me that it is not the first time and she recommended that I just have to file a lost card so I can have my license reprinted at my OWN cost.”

I swear you can’t make this stuff up.

Has this happened to you or anyone you know? 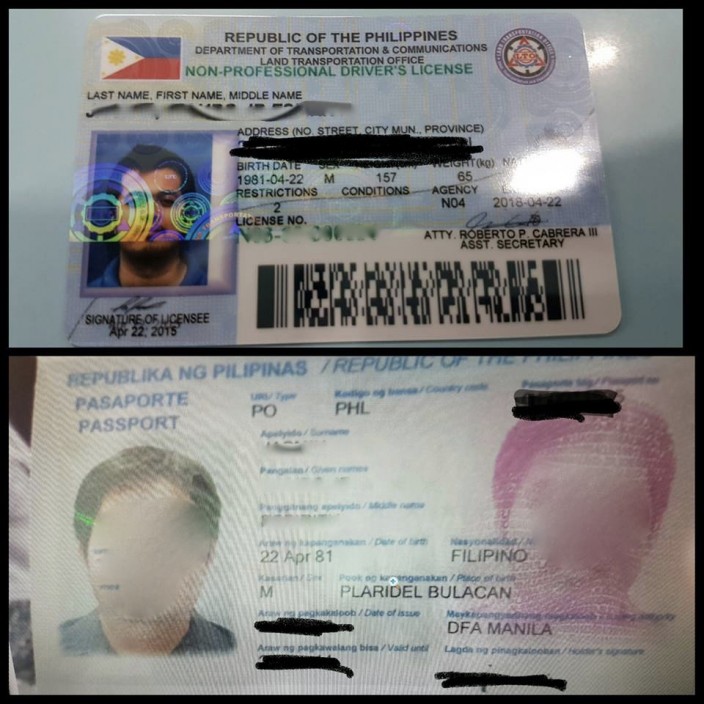 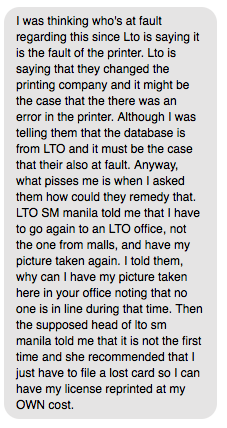