Rage within the machine

Oh I bet it seemed like the most important thing at the time. But after millions of Internet views, hundreds of thousands of comments, several days in hiding, the threat of possible jail time or a lifetime immortalized on YouTube, just ask yourself, was it worth it?

I’m sure in hindsight, Robert Blair Carabuena, who famously slapped around a helpless MMDA officer, and Bill Emerson Tan Ang, who hit instant stardom when he was videoed drawing a gun on a taxi driver along EDSA, would think not. To think that they’re the lucky ones.

Spare a thought for others that haven’t been as lucky. Like Mark Vincent Garalde, the cyclist who was shot in Quiapo over a petty incident between him and the driver of a Hyundai Eon; Delio Bathan, a 59 year old father of 3, who was savagely beaten to death by someone in a Mazda CX5 over a simple, accidental 'tap or scrape' last September 15 in Frontera Verde along Ortigas Avenue Extension; or George Anikow, an American military serviceman residing in Makati, who was stabbed to death for merely tapping the side of a car. 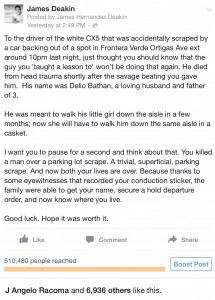 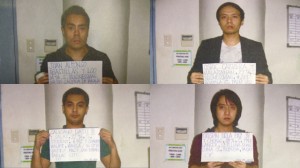 The four men charged with the murder of former US Marine, George Anikow due to a petty road rage incident

The reports from the guards claim that they had stopped a Volvo SUV from entering a closed gate of the Rockwell  Center in Makati and were asking the identities of the 4 men when Anikow, a Bel Air resident that was walking home, joined in the conversation and told the men to cooperate with the guards. An argument took place; Anikow walked off but tapped the side of the SUV they were in, which led to the four suspects mauling him and eventually fatally stabbing him right there on the street outside the guard house.

Why he got involved in the guard’s inspection is irrelevant, as is the reason for him tapping the side of the car, because the question that really needs to be answered here is: what exactly is it that makes people turn into monsters once behind the wheel of their cars?

Well that is exactly what TJ Manotoc asked me on ANC’s Headstart, among other questions, which I felt are important enough to answer again in print.

Interestingly, TJ used the word ‘phenomenon’. And I have to agree. Put that same person in a line at the bank, grocery or wherever, and he or she is normally quite polite and well-behaved. But strangely, once seated behind the wheel, encased in expensive metal and tinted glass, that same law-abiding, tax-paying, God-fearing, Jose-Mari-Chan-Christmas-album-listening person thinks he is freaking Iron Man.

Case in point. How many times have you exchanged the sign of peace with a stranger in church, or been offered to go ahead in the communion line, only to see this same person refuse to let you out of your car park space after mass?

Filipinos by nature are not a confrontational race. But there’s something about the anonymity of the air-conditioned cabin of a car that makes some people feel 10-feet tall and bullet proof. Which is why I always tell people who are faced with a blood pressure spiking situation: try and imagine this 15 minutes after. Will it matter?

Yes, other drivers can be downright annoying, and others are the perfect examples of why contraception was invented, but 15 minutes after you got cut off, ask yourself would you rather be 15 minutes down the road or six feet underground? Not so important after all, is it?

Which led TJ to ask about tips on how we can deal with it, and whether or not  weapons should be allowed to be carried in the car.

Personally, I never jump into my car unarmed. My weapon of choice is a dash camera, because like the pen, it is also mightier than the sword. It records everything. Voice and all. And the very thought of having one on all the time affects my temperament greatly, precisely because half the triggers of road rage comes from “Did you see what he did?? I gotta show him who is boss!” or, in cases of an accident, it relieves the pressure of having to rely on the other guy to admit fault. You literally have the right to remain silent. Either way, it also forces me to drive better for fear of looking like a jerk myself if I have to use the footage as evidence.

I currently use a couple of HP dash cams, one from Growl Audio that connects to my Android head unit and Garmin dash cam that cost around 15k because I wanted something with complete GPS data and that is heat resistant. That may sound like overkill, but I have already gotten more than my money back in avoiding extorting cops.

I actually feel so strongly about dash cams that I have even set up a petition to make them mandatory and encourage you to click and sign HERE if you also see the value in it and want to support it. But if you can’t afford that, or don't believe it should be mandatory, try wrapping your steering wheel in bubble wrap. It works wonders! 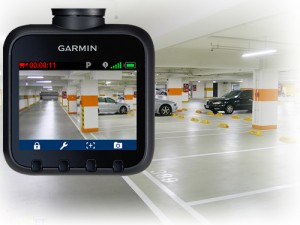 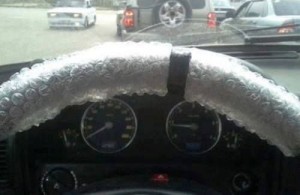 But seriously, (not that I was joking about the bubble wrap) please leave your tempers and egos behind when you slip behind the wheel.  Our roads are dangerous enough as it is. Especially now with the rainy season and traffic at its all-time worst, keep a cool head.

Pride and testosterone have no place on our streets. At the end of the day, if you’ve become a Youtube sensation for all the wrong reasons, or stabbed or beaten a father of three to death, does it really matter who overtook who, who cut who off, or whether someone scraped your car or tapped on your stupid hood? Pick your battles.

Join the petition to bring eyes back on our roads https://www.change.org/p/make-dash-cams-mandatory-in-all-vehicles-in-the...