When you're not feeling Uber good in a car

Last week, a post went viral on social media about an UBER driver who was accused of either trying to hold up (or do something worse) to a female passenger.

Elisa Borja, who would otherwise remain nameless except for the fact that she set her post to public and cried out to her followers to share it, posted this on her wall: 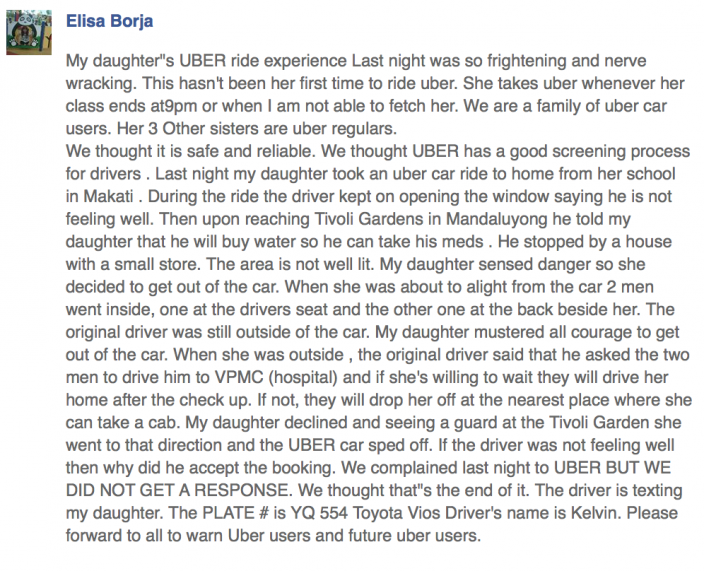 Pretty scary stuff. But even though I must have been tagged a hundred times (or forwarded at least) I didn't share it because I didn't have both sides. Besides which, even if did turn out to be true, I didn't want to create mass panic that would shut down what is essentially the safest alternative to cabs we have ever had in this country, due solely to what I believe is an isolated incident.

Eventually, through the Uber partners group that I am a member of, we hear the side of the driver. Turns out he really was rushed to hospital and has records to prove it. Also, the good samaritan who drove the Uber driver to the hospital has also come forward and verified the same story. All three accounts are consistent with making sure that the lady passenger had the option of either riding to the hospital or being dropped at a well-lit secured place to request another ride. 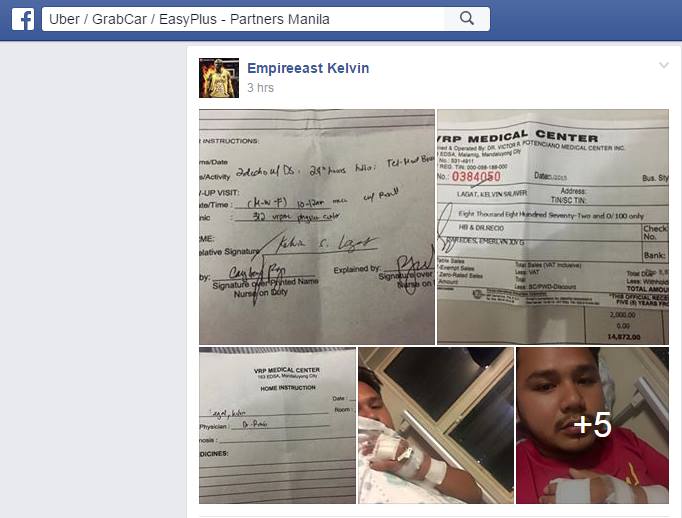 Many, however, agreed with the mother that the driver shouldn’t have accepted the ride if he was feeling bad and should never have invited a stranger into the car. True. But, as a person who collapsed and had to be rushed to the ER only last Saturday for a sudden drop in blood sugar, I can tell you that you don’t always see or feel it coming and you don’t normally make the most sound decisions when you are convinced you are dying. 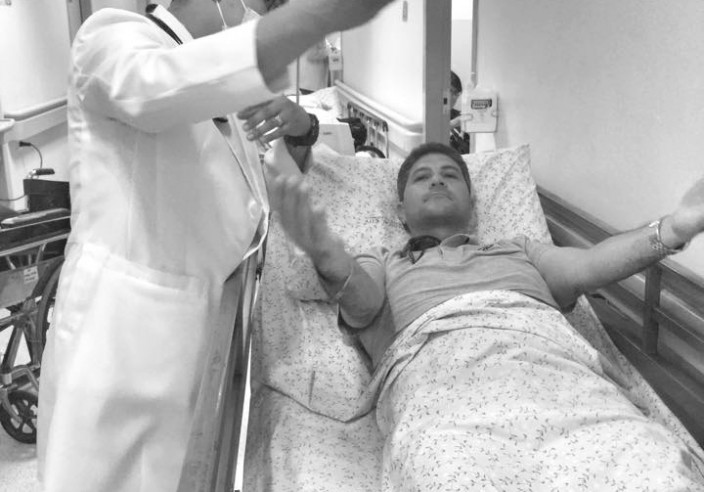 Health scares can happen anytime. This happened to me on the same day as Ms. Borja's daughter's incident. Never happened before, and I never saw it coming. So let's not be quick to judge the Uber driver that took on the ride and for making less than sound decisions when it struck. You're not yourself when you think you're dying

Yes, Uber is not perfect. Nothing is. But after spending a few days driving one last week for a story on CNN Philippines’ Drive, as well as the last year using it as a passenger, I believe they are as close to it as possible. I'd say 95% by the average of talking to my passengers and my own personal experience.

Regardless, as part of standard procedure, UBER has suspended the driver's account until the investigation is completed. Now try and imagine that happening in a regular cab. Even if a reputable cab company suspended or fired the driver, I can guarantee you that he will be driving another cab the following day. This is why I do not want to see UBER, or similar services, the victim of fear mongering.

It is no different to calling for the government to ban Facebook because you were offended by one person’s post. That’s why the invented the block button, or in the case of UBER, the rating system and feedback feature. Try using it. It is highly effective and a lot faster than typing a rant on social media.

PS. if this ever happens to you, you can always call LIFELINE. They can dispatch a driver on call to get you AND your car home safely if you are suddenly unfit to drive. Just dial 16911 and they’ll get you there safely. Contrary to popular belief, it is not only for drunk drivers. It's for anyone that feels they are no longer fit to drive themselves and cannot leave their car behind.

PPS. A friend of mine, Iza Calzado, who is one of the most responsible social media celebrities out there recently had an incident with an Uber driver. Now this was one that really did deserve public attention, as the driver was way out of line, but she resisted, and PM'd me the incident instead. By doing so, it was resolved in less than 5 minutes flat. The driver was suspended, and most likely by the time you read this banned from the system. Now here's a person that could have easily used her celebrity status to destroy Uber, but she did it responsibly. And even posted a follow up to her post congratulating Uber for their swift reply. We can all learn from that.